“We have fought hard to eradicate terrorism & we will continue to fight extremism & defeat it. Malala this is your home & we are glad you are home,” the prime minister said while talking to Malala Yousafzai who along with her family met him at Prime Minister’s Office in Islamabad.

The Minister of State for Information and Broadcasting Marriyum Aurangzeb, the Minister for Information Technology Anusha Rehman, the Prime Minister’s Sepecial Advisor Mussadiq Malik and the Chairperson of Benazir Income Support Programme (BISP) Marvi Memon were also present in the meeting.

Meanwhile a special ceremony was also organized in honour of Malala Yousaf at the PM’s Office wherein while addressing, the prime minister said Malala was pride of their nation. He said the government would ensure safety and security whenever Malala Yousafzai was in Pakistan 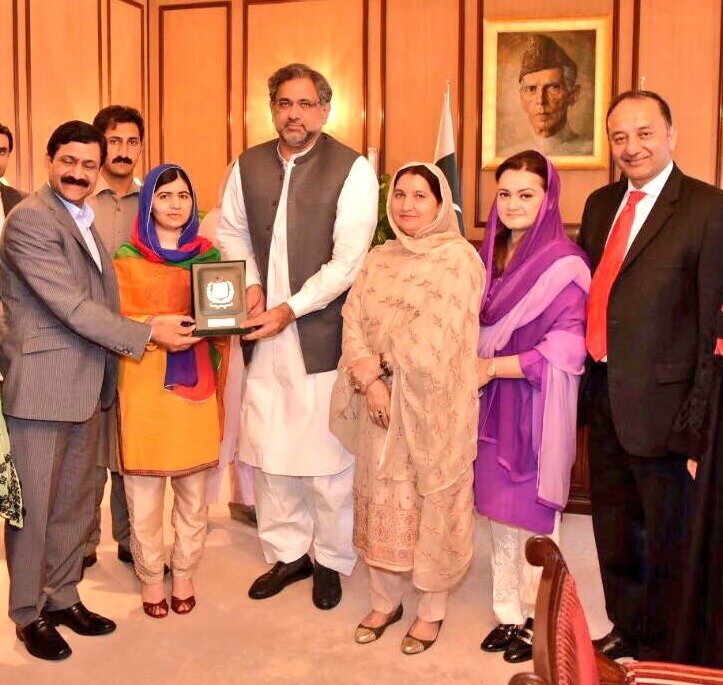 The Nobel Laureate Malala Yousaf said today was the happiest moment of her life. She said she always dreamt of returning to her Country, and still she couldn’t believe that she had returned home. ““It’s a dream come true to come home to Pakistan,” she said.

“I never wanted to leave my Country but my doctors advised me to go abroad.”

Malala Yousafzai said she had seen women facing challenges in her society. She said they had invested $600 million for female education in Pakistan under Malala Fund.

“We are not just about giving books and pens but empowering women through critical thinking, changing mindsets and in training teachers through our efforts.” “Girls can be super heroes, girls can be teachers, girls can be leaders & provide inspiration to women in Pakistan.”

Malala said “Everyone has to unite; Sindhis, Baluchis, Pushtoon, Punjabi & Kashmiris – our identity is one, our identity is Pakistan. All political parties need to unite & work for our Country.”

“Women should get equal rights, & have access to good heath & equal opportunities. I pray we build a strong democracy since it is the will of the people. I thank all those in the military & in politics in helping eradicating extremism in Pakistan.”

Earlier in the morning, the 20-year-old Malala Yousafzai along with her family returned to Pakistan, more than five years after she left the Country following a failed assassination attempt by militants in her native town Swat.

Malala Yousafzai is expected to stay in Pakistan for four days, and hold meetings with the Chief of Army Staff (COAS) General Qamar Javed Bajwa as well as other important figures.

In 2014, Malala Yousafzai became the youngest recipient of the Nobel Peace Prize at the age of 17 in recognition of her efforts for children’s rights.

Mati
Mati-Ullah is the Online Editor For DND. He is the real man to handle the team around the Country and get news from them and provide to you instantly.
Share
Facebook
Twitter
Pinterest
WhatsApp
Previous articlePM Khaqan announces Rs 1 billion for Education Endowment Fund
Next articleThird session of series “Muzakra” at Lok Virsa on March 30