Saba Qamar and Bilal Saeed have recently become a target of social media controversy because of shooting a song in Masjid. Though the details of the exact shooting and how it happened were revealed later, the stars have come under some serious fire due to the incident and now everyone is out and about to bash them. 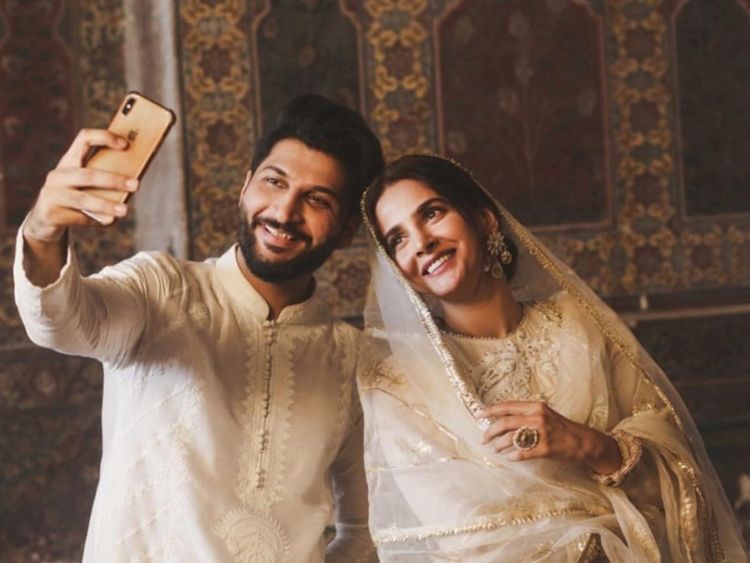 In the midst of this all, a Saba Qamar twitter account revealed that she was attacked and injured on her way home. This has caused a frenzy on social media, but how true is the news? Let’s find out.

Saba Qamar and Bilal Saeed recently shot a part of the latter’s upcoming music video in Wazir Khan Masjid, Lahore. The controversy started when pictures were released on social media, and people criticized the celebs using Masjid for shooting a music album. However, later on, Saeed came up with the explanation that only Nikkah part of the song was shot in Masjid and that too without any music.

He said that the respect of the Masjid was kept in mind, and the complete protocol was followed to ensure that as well. However, social media users with their divided opinion could not resist making a fuss out of the explanation as well.

Saba Attacked In Her Car

Just after the incident, a Saba Qamar twitter account revealed that she was attacked when on her way in the car, which left her injured. The tweet read: 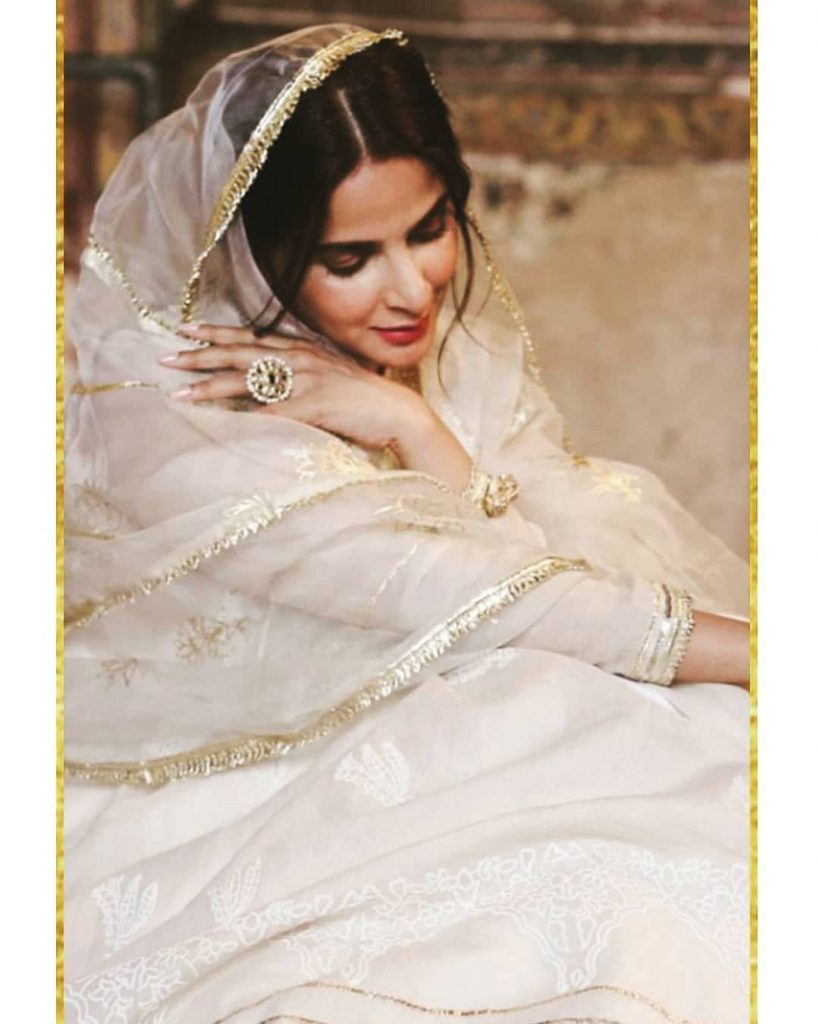 Soon after the tweet, another argument erupted on social media where people started bashing those who attacked and flooded Saba’s account with messages on how she was doing.

After the tweet went viral, to the shock of everyone, Saba came forward with an explanation that the account which posted this tweet was fake and did not belong to her. She said that the rumors are being spread by someone else and she does not have any TikTok or twitter account by the said name. to the relief of everyone, she confirmed that her “only twitter account is @s_qamarzaman, all the other accounts are fake and they’re all posting fake statements using my name.

She also requested people to “report the other pages and only follow the official ones”. Here is the screenshot of what we shared in her story: 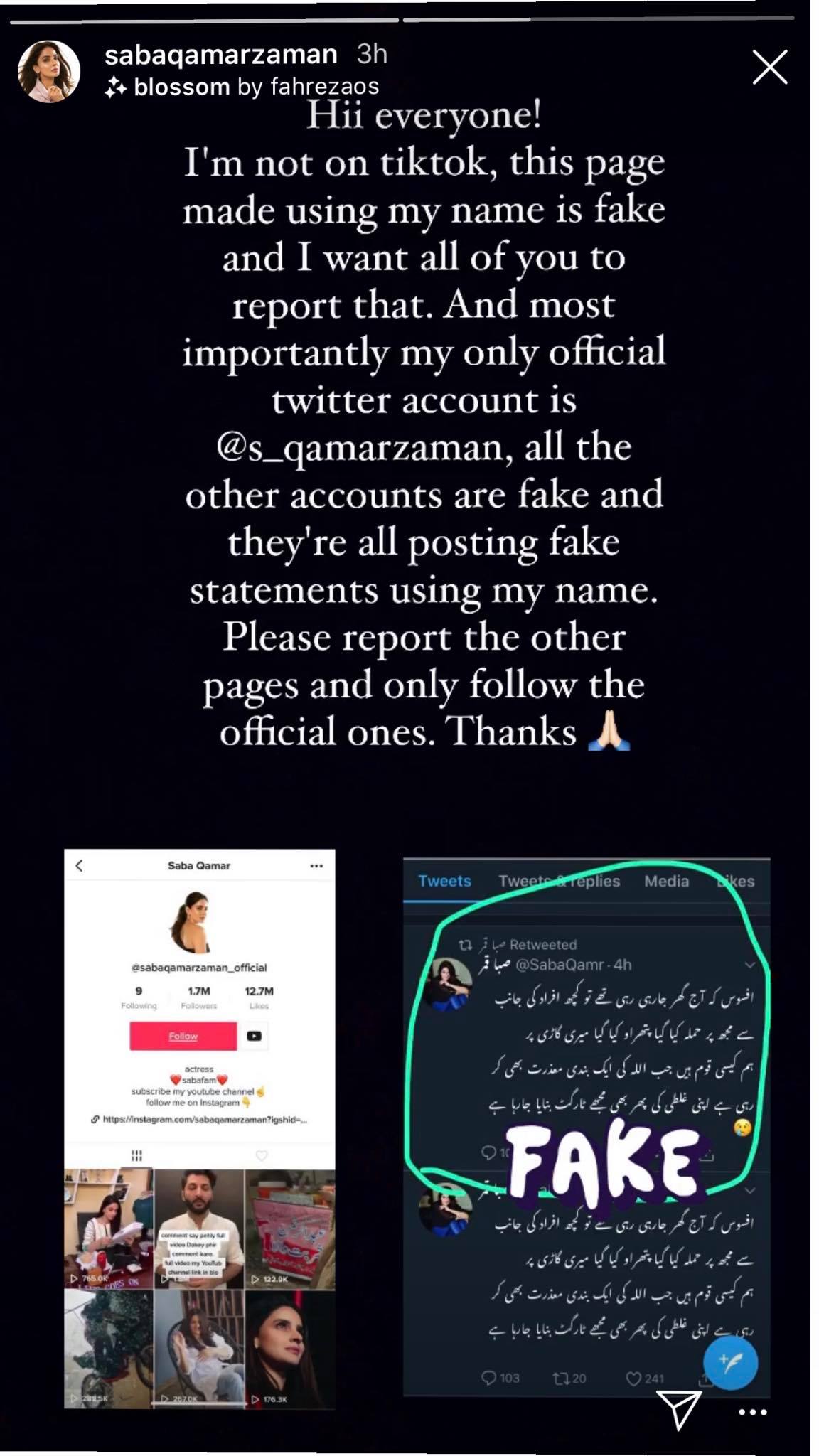 We are revealed that the news was false, and Saba Qamar is safe. We do hope and believe that this matter is sorted easily, and the forgiveness is given to Saba and Bilal by the public.

Kainaat Maqbool
A strategic and content marketeer, Kainaat has been working as a writer and content consultant for over 6 years. When she isn't writing or making marketing strategies, she is teaching people to do the same.
Share
Facebook
Twitter
Pinterest
WhatsApp
Previous articleStudents of Wana Cadet College shine in FBISE exams
Next articleSouth Asian peace and stability linked with peace in Afghanistan: FM Qureshi