The Washington-based United States Commission on International Religious Freedom (USCIRF) has released its annual report 2020, recommending India to be designated as the “Country of Particular Concern” for the first time since 2004.

The report focuses on two groupings of Countries: Countries of Particular Concern and those that USCIRF recommends the US State Department should place on its Special Watch List.

Along with 13 other Countries, India has been recommended by the USCIRF for designation as the Country of Particular Concern, vindicating that the Narendra Modi-led Hindutva regime in New Delhi has been engaged in systematic, ongoing, egregious violations of religious freedom.

The USCIRF Vice Chair Nadine Maenza said that the Citizenship (Amendment) Act in India “potentially exposes millions of Muslims to detention, deportation, and statelessness when the government completes its planned nationwide National Register of Citizens”.

“Perhaps the steepest, and most alarming, deterioration in religious freedom conditions was in India, the largest democracy in the world,” the USCIRF Vice Chair Nadine Maenza said. 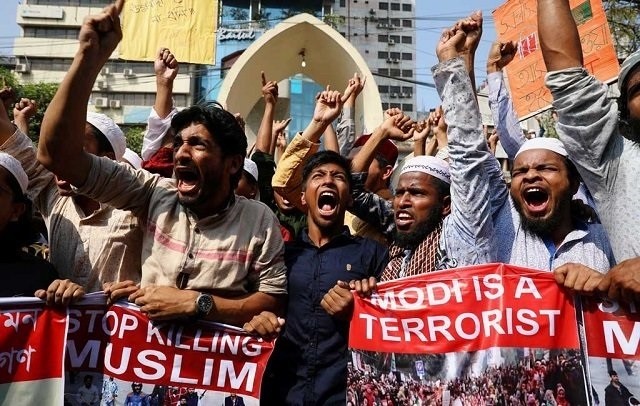 It stated that the national and various state governments also allowed nationwide campaigns of harassment and violence against religious minorities to continue with impunity, and engaged in and tolerated hate speech and incitement to violence against them.

The USCIRF annual report 2020 stated that during 2019, discriminatory policies, inflammatory rhetoric, and tolerance for violence against minorities at the national, state, and local level in India increased the climate of fear among non-Hindu communities.

Thus, the report recommended the US government to designate India as a “Country of Particular Concern”, and impose targeted sanctions on Indian government agencies and officials responsible for severe violations of religious freedom by freezing those individuals’ assets and/ or barring their entry into the United States.

Mati
Mati-Ullah is the Online Editor For DND. He is the real man to handle the team around the Country and get news from them and provide to you instantly.
Share
Facebook
Twitter
Pinterest
WhatsApp
Previous articleTwo women seriously injured as India fires along LoC, Pakistan protests
Next articleNew poll finds 88.8% students passionate to work as volunteer in fight against COVID-19