US micromanaged Ukraine during the Presidency of Poroshenko through Biden

Monitoring Desk: The United States was micromanaging the Ukrainian government through the then Vice President Biden during the presidency of former President Poroshenko.

This was claimed by a Deputy of Parliament of Ukraine Verkhovna Andrei Derkach (Андрей Деркач).

MP Andrii Derkach made public recordings of conversations with “voices similar to Poroshenko and Biden,” which discussed the resignation of Viktor Mykolayovych Shokin who was Prosecutor General of Ukraine that time in exchange for $1 billion in US loan guarantees, external management of the Ukrainian government and tariff increase by 100% instead of 75%.

Recording of conversations that took place at the end of 2015 and during 2016 by former President of Ukraine Poroshenko with former Vice President of the United States Biden and former United States Secretary of State Kerry were made public at a press conference held by Derkach at Interfax-Ukraine agency. Former prosecutor Konstantin Kulik, who investigated the crimes of the Yanukovych regime, also took part in the event.

According to Derkach, records confirming the facts of international corruption, treason, and external governance at the highest state level were handed to him by the investigative journalists. According to them, the recording of conversations was made by Poroshenko personally.

The member of the Parliament stressed that Biden demanded that Poroshenko resign Shokin, blackmailing him with $1 billion in loan guarantees that the United States was to provide to Ukraine.

In his, over an hour-long press conference, he produced an alleged recording of a telephone conversation between former President Poroshenko and former US Vice President Biden while both were still in power. 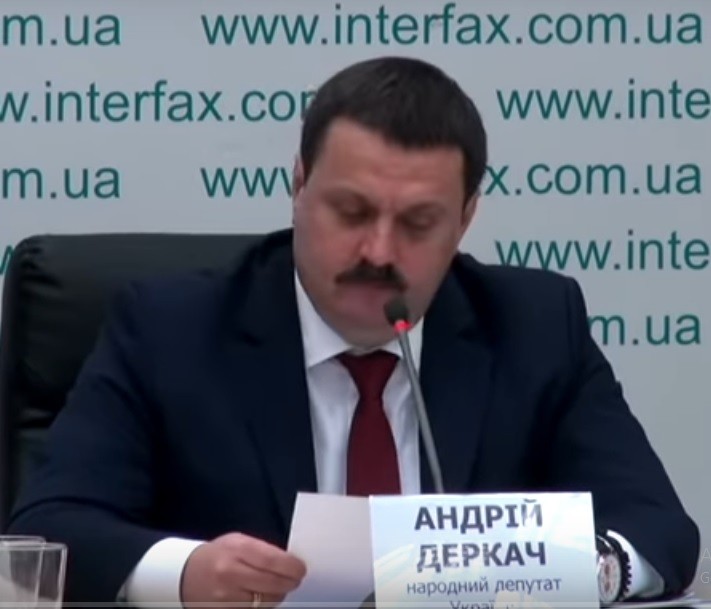 From the conversation, it is clear that Biden gives the president of Ukraine direct instructions and he strictly fulfills them.
According to a story of Ukrainian News Agency, Andrei Derkach during his press conference said that Poroshenko even boasts that he raised his tariffs of public utilities even higher than demanded by the IMF.
Biden asks to speed up the nationalization of Privatbank Kolomoisky and calls the oligarch “a pain in the ass,” and Poroshenko, in turn, asked Biden to influence Self-Help so that she would vote for the appointment of US citizen Yaresko as Prime Minister of Ukraine. Then she was the Minister of Finance. Poroshenko reports to Biden that he has fulfilled his order and knocked out of Shokin a letter of resignation from the post of Prosecutor General and requests that his comrade-in-arms Lutsenko be agreed to this position.

The alleged recording indicates that the complete external management of Ukraine was done under former President Poroshenko.

Biden demanded that Poroshenko change the government and the prosecutor general to receive the IMF tranche, – notes of Derkach
Biden is Trump’s main rival in the upcoming US presidential election in November. He is slightly ahead of his competitor.