US Congressmen stand up for Indian farmers, ask Delhi regime to adhere to democratic values

As the Indian regime led by the hardliner Narendra Modi has already been immersed in a whirlpool of multiple problems, the sit-in demonstrations by thousands of farmers in New Delhi for the third consecutive week have further added to its woes.

Tens of thousands of farmers from the Indian Punjab and Haryana States have been staging sit-ins at Delhi’s Singhu, Tikri, and Ghazipur Border Points for over two weeks, demanding the Central government to repeal the newly enacted farm laws.

Last Saturday, farmers held a massive rally to block the Delhi-Jaipur Highway followed by an all-India hunger strike a day after.

The farmers have pledged to intensify their agitation and spread it nationwide till their demands are met. 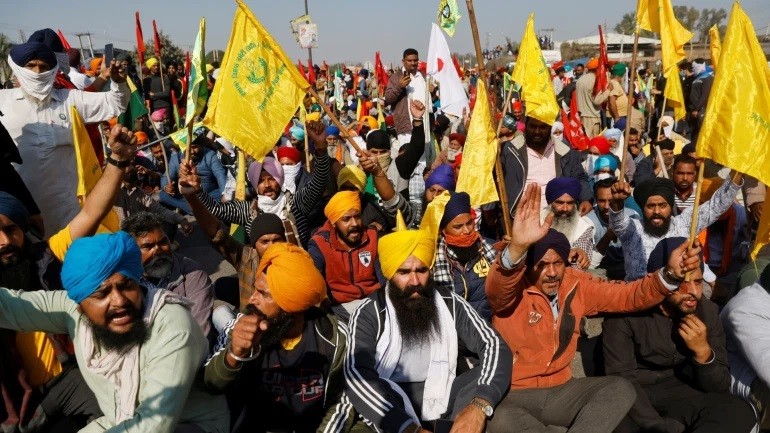 The Indian government has agreed to negotiate with the farmer unions but remains adamant to withdraw the controversial agricultural laws.

It has also employed aggressive measures against farmers including tear gas, water cannon, and baton strikes, etc to disperse them; however, it didn’t shatter their resolve.

The aggressive tactics by the Indian government to suppress the farmers’ protest also caused resentment among the US Congressmen.

The US Congressman and the Co-Chair of the American Sikh Caucus John Garamendi along with Congressman Jim Costa and Congresswoman Shelia Jackson Lee sent a letter to the Indian Ambassador to the United States Taranjit Singh Sandhu, regarding India’s recent crackdown on protesting farmers.

The Congressman John Garamendi and his colleagues expressed their solidarity with the protestors and defended their right to peacefully protest these new laws.

“We write to you regarding the ongoing protests in India surrounding the passage of agricultural reform bills. While governments certainly have the purview to set their own internal agricultural policies, we are deeply concerned about the response to these protests by the Indian government, which has reportedly suppressed the protesting farmers’ right to assemble in peaceful protest.

Hundreds of thousands of farmers from the states of Punjab and Haryana that have made their way to New Delhi to peacefully protest these new agricultural laws, and the Indian government has met these peaceful protestors with tear gas, water cannons, barricades, baton attacks, and more. Many of these farmers have children, relatives, and friends who are U.S. citizens, many of whom have reached out to us to share their concerns about these developments.

A respect for the rights of freedom of assembly, freedom of the press, and a thriving civil society are core components of a functioning democracy. We have been distressed this year to see actions by the Indian government that have restricted these rights for many Indians; not only for farmers, but also for religious minorities, and human rights organizations.

The U.S.-India relationship has been deeply important for both countries for decades, and this partnership is particularly vital now in the context of growing strategic competition in the Indo-Pacific region. Our strong bilateral relationship is based not only on shared interests, but also on what we hope are shared democratic values.

We must acknowledge that we have also struggled at times in the United States to live up to the ideals of a just, democratic society, but we continue to strive toward it. As partners and friends, we must encourage one another to continue striving toward those ideals.

We urge the Indian government to demonstrate its respect for these crucial democratic freedoms, and to be a model of democratic values in the vital Indo-Pacific region.”

Mati
Mati-Ullah is the Online Editor For DND. He is the real man to handle the team around the Country and get news from them and provide to you instantly.
Share
Facebook
Twitter
Pinterest
WhatsApp
Previous articleLess than 2% customers return products bought from Daraz
Next articleOur Favorite Pakistani Influencers You Should Be Following Right Now!