DOHA, Qatar: The United States and the Afghan Taliban on Saturday signed a historic deal aimed at bringing peace in Afghanistan.

The peace agreement was signed by the US Special Representative for Afghanistan Reconciliation Zalmay Khalilzad and the Afghan Taliban Deputy Leader Mullah Abdul Ghani Baradar in Doha, Qatar.

The following is the text of the US-Taliban peace agreement

The signing ceremony was witnessed by the Amir of the State of Qatar His Highness Sheikh Tamim bin Hamad Al Thani, the US Secretary of State Mike Pompeo, a 31-member Taliban delegation, foreign ministers from seven countries including Shah Mahmood Qureshi of Pakistan, and representatives from 50 countries. 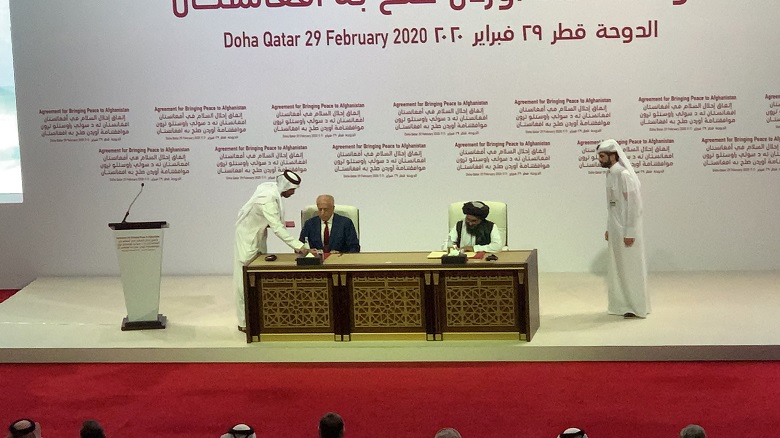 The US-Taliban peace agreement paved the way for ending a 19-year-old conflict, the resumption of the intra-Afghan dialogue, and NATO troops’ withdrawal from Afghanistan.

Earlier while addressing the gathering ahead of the signing of the peace deal, the Head of Afghan Taliban’s Qatar Office Abdul Ghani Baradar thanked Pakistan for its role in the Afghan peace process.

Mullah Abdul Ghani Baradar also appreciated the role of China, Russia, Iran, Uzbekistan, Norway, Indonesia and other countries in supporting the peace process. He hoped that they would continue to play their part in rebuilding Afghanistan.

The Taliban leader said that we want unity and prosperity of Afghanistan and for that reason, I call upon all factions to make the peace deal working.

In his address, the US Secretary of State Mike Pompeo said that the US and Afghan forces worked together for the greater cause of peace.

Mike Pompeo said that it’s the right of Afghan people to live in a peaceful environment with prosperity.

Talking to media, the former Taliban Ambassador to Pakistan Abdul Salam Zaeef assured to the people of Afghanistan that the next Afghanistan will be stable and it will be for all Afghanis including women, men, minorities, and majorities, all of them.