US-Afghan Contractors Crisis: Either in Guantanamo Detention Camp or in Guam Delta Camp

This is the crust of an article written by Prague-based foreign affairs expert Shazia Anwer Cheema published on Friday in daily Pakistan Today.

In her article “The Contractors: A story that moves between Guantanamo to Guam”, she writes that US-Afghan contractors would stay at Camp Delta in “Naval Base Guam” and from where paperwork of their visas and other documentation would be done and then they would be transported to the USA. This process can take months and even years.  Officially they will be on US territory in Guam Island, even though it is in the Micronesia sub-region of the western Pacific Ocean. 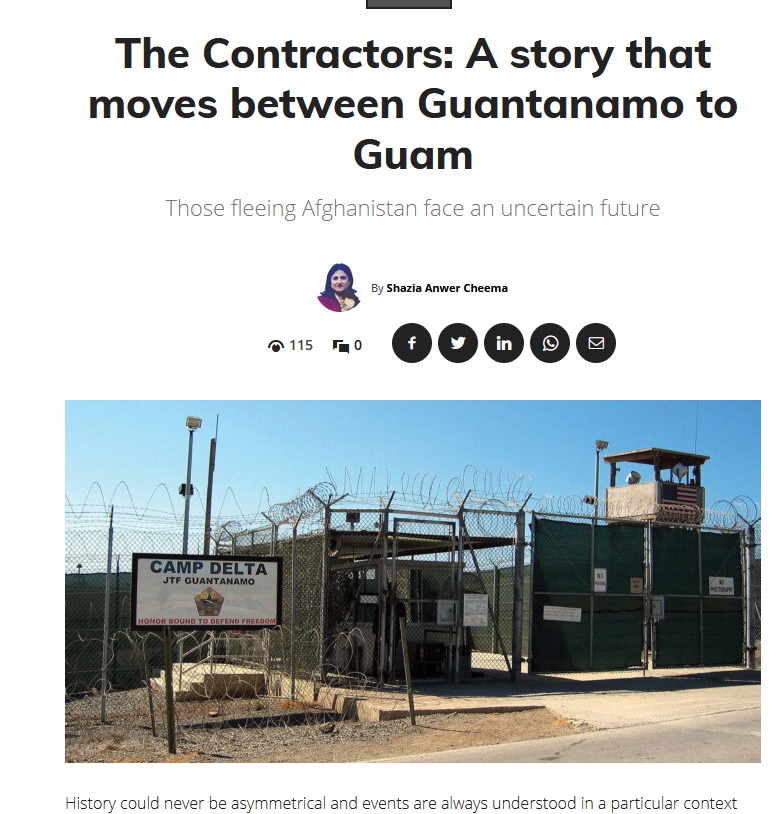 She indicates these contractors are those who had been working with allied forces as translators, informers, drivers, cooks, and guards, and they were promised by the USA that they would be looked after in case the Taliban came back to power. Since April 2021, these contractors had been demanding evacuation, but only some were transported out of Afghanistan before Kabul fell.

According to US media, Afghan contractors would be confined and guarded in Guam Island with strict restrictions on free movement. The possibility of many being deported back to Afghanistan cannot be ruled out. She called this situation sardonic.

She writes whenever foreign invaders occupy a geographical location under the pretense of being saviours, the first organic outcome always is the exploitation of hunger and lack of other basic human necessities. The ambiance of chaos and civil unrest always provides a nursery for inexpensive, low-cost compromises by the local population and history has witnessed this experimentation over and over again. The US-led NATO alliance repeated the saviour theme by entering Afghanistan in October 2001 and turbulent economic conditions created a market for the local Afghans to earn their bread. Locals saw the opportunity of buying the bread by labour, such as translation, spying, providing information about the fellow citizens, becoming guides and proxies for other unworthy deeds on which invaders preferred not to risk themselves. All those locals, in exchange for bread and butter plus a promise of being exported to the First World, started performing their assigned duties. The USA also coined a proper noun for them: the “Contractors”.

“For Afghans, the irony is that if you are an enemy you will be dragged to Guantanamo Bay and if a friend then you will be taken to Guam. If history has still not taught us that a few nations cannot and can never get out of an “Us Versus Them” mindset, and their animosity or their friendship leads to a similar outcome,” she concluded her opinion.