SARGODHA, Pakistan: The University of Sargodha conferred degrees on 78,701 students during its Sixth Convocation held at the Main Campus in Sargodha on Thursday.

The ceremony was significant as it marked graduation of the 61 percent girls of the total students.

The Acting Chinese Ambassador Lijian Zhao was the guest of honour while the Vice Chancellor (VC) University of Sargodha Dr Ishtiaq Ahmad presided over the ceremony.

On the occasion, 40 PhD degrees, 1,399 MPhil, 31,724 MA/MSc, 15,961 BS/BBA and 29,577 BA/BSc degrees were awarded to the students from disciplines of Medical and Health Sciences, Pharmacy, Agriculture, Sciences, Arts and Humanities and Social Sciences.480 students with distinctions were honoured with medals.

The ceremony was initiated in a ritualistic manner, with the entrance of the academic procession comprising the Vice Chancellor and Deans of seven faculties at the convocation venue. 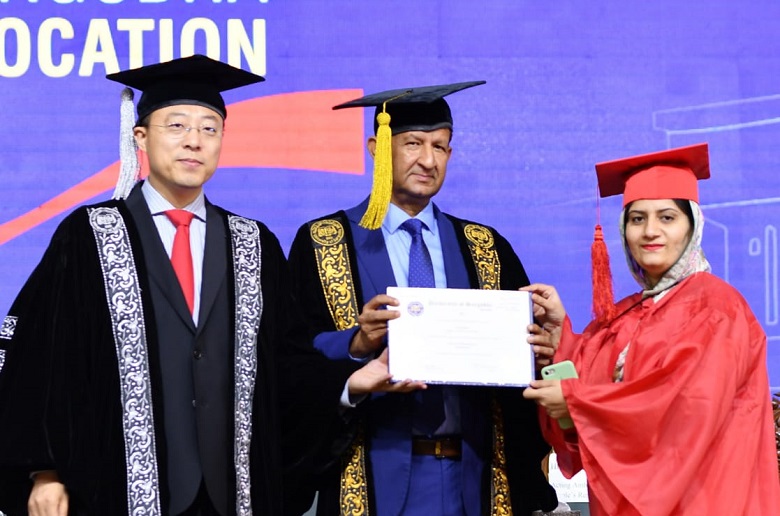 While addressing the ceremony, Lijian Zhao expressed gratitude to the Vice Chancellor for providing him with the opportunity to visit Sargodha – the city of eagles – for the first time. He appreciated the University administration for building academic and research linkages with esteemed Chinese institutions.

While quoting a Hadith that “Seek Knowledge even if you have to go as far as China,” the acting ambassador urged the students to equip themselves with right knowledge and skills to play their part in taking Pak-China relations to the new heights and getting maximum benefits from the China Pakistan Economic Corridor (CPEC).

“In 2010, only 2,000 Pakistani students were studying in China, however this number increased exponentially ever since the launch of CPEC, rising to 28,000 in 2018. Pakistan currently ranks third in the number of students studying in China, behind South Korea and Thailand,” he added.

Delivering his convocation speech, Dr Ishtiaq Ahmad congratulated the students on their achievement while highlighting the share of their families, faculty members and friends in their proud successes.

Dr Ishtiaq Ahmad said that the University is making a huge difference in the demographic and economic growth of Sargodha city and Punjab province, especially by generating skillful workforce, innovating agrarian products and providing community service.

The VC said that our mode of teaching at University of Sargodha is not confined merely to imparting knowledge, but we also teach our students the religiously and culturally rich social values we have learned or inherited from our parents and elders, adding that throughout the year, our University remains abuzz with scholarly events, co-curricular activities and sports competitions.

“During my over two years of tenure, I have implemented several academic reforms and development initiatives such as promoting a culture of academic enquiry among students and faculty, introducing modern modes of quality teaching and research, fostering academic-industrial links as well as national and international collaborations,” Dr Ishtiaq added.

After the formal ceremony, the students celebrated their achievements with enthusiasm and fun-filled activities.

Mati
Mati-Ullah is the Online Editor For DND. He is the real man to handle the team around the Country and get news from them and provide to you instantly.
Share
Facebook
Twitter
Pinterest
WhatsApp
Previous articlePakistan’s Secretary Defence attends 8th Moscow Conference on International Security
Next articleIndia’s NSG membership to put Pakistan at severe disadvantage: Dr Shireen Mazari