Monitoring Desk: The report released by United Nations about Human Right status in India indicates that the government led by the Bharatiya Janata Party (BJP) harassed and at times prosecuted activists, lawyers, human rights defenders, and journalists for criticizing authorities.

There were repeated allegations of violations by government forces in Jammu and Kashmir during security operations.

The AFSPA, which is also in force in several states in India’s northeast, provides soldiers effective immunity from prosecution for serious human rights abuses. The government has failed to review or repeal the law despite repeated recommendations from several government-appointed commissions, UN bodies and experts, and national and international rights groups.

In May, police shot at demonstrators protesting a copper plant in Tamil Nadu state, killing 13 people and injuring 100. Police said they were compelled to respond with live ammunition after demonstrators stoned the police, attacked a government building, and set vehicles on fire. A fact-finding report by activists and civil society groups said police failed to follow standard operating procedures for crowd control. 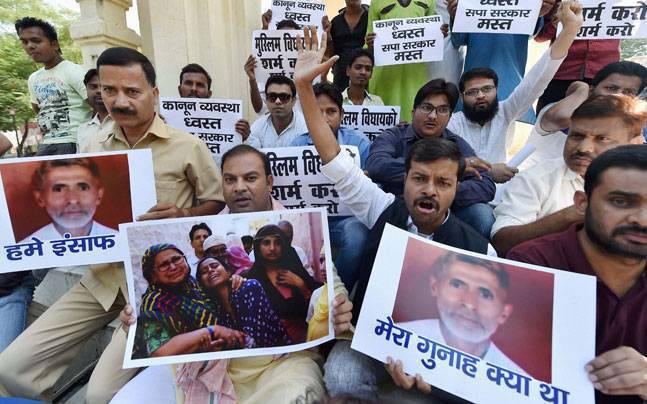 After the BJP formed the government in Uttar Pradesh state, 63 people died in alleged extrajudicial killings by state police between March 2017 and August 2018. The National Human Rights Commission and the Supreme Court sought responses from the state government. The killings in Uttar Pradesh highlighted the lack of accountability for police abuses and the need for police reforms.

Mob violence by extremist Hindu groups affiliated with the ruling BJP against minority communities, especially Muslims, continued throughout the year amid rumors that they traded or killed cows for beef. As of November, there had been 18 such attacks, and eight people killed during the year.

In July, the government in Assam published a draft of the National Register of Citizens, aimed at identifying Indian citizens and legitimate residents following repeated protests and violence over irregular migration from Bangladesh. The potential exclusion of over four million people, many of them Muslims, from the register raised concerns over arbitrary detention and possible statelessness.

Dalits, formerly “untouchables,” continued to be discriminated against in education and in jobs. There was increased violence against Dalits, in part as a reaction to their more organized and vocal demands for social progress and to narrow historical caste differences.

In November, farmers protested against debt and lack of state support for rural communities, and called for establishing rights of women farmers and protecting the land rights of Dalits and tribal communities against forcible acquisition.

In April, nine people were killed in clashes with police after Dalit groups protested across several north Indian states against a Supreme Court ruling to amend the Scheduled Castes and the Scheduled Tribes (Prevention of Atrocities) Act. In response to a complaint of alleged misuse of the law, the court had ordered that a senior police official should conduct a preliminary inquiry before a case is registered under the law. Following the widespread protests, the parliament passed amendments to the law in August, overturning the Supreme Court order.

In July, police in Ahmedabad city raided an area, home to 20,000 members of the vulnerable and marginalized Chhara tribe, a denotified tribe. According to residents, police allegedly brutally beat up scores of people, damaged property, and filed false cases against many of them.

A January report by a government-appointed committee on denotified tribes—tribes that were labeled as criminal during British colonial rule, a notification repealed after independence—said they were the most marginalized communities, subject to “social stigma, atrocity and exclusion.”

Tribal communities remained vulnerable to displacement because of mining, dams, and other large infrastructure projects.

In September, the Supreme Court upheld the constitutionality of the biometric identification project, Aadhaar, saying the government could make it a requirement for accessing government benefits and filing income tax, but restricted it for other purposes. Rights groups raised concerns that Aadhaar registration requirements had prevented poor and marginalized people from getting essential services that are constitutionally guaranteed, including food and health care.

Authorities continued to use laws on sedition, defamation, and counterterrorism to crack down on dissent.

In April, police in Tamil Nadu state arrested a folk singer for singing a song at a protest meeting that criticized Prime Minister Narendra Modi. In August, state authorities detained an activist for sedition, allegedly for describing police abuses against protesters opposing a copper factory at the UN Human Rights Council. When a magistrate refused to place him in police custody, police arrested him in an older case and added sedition to the charges against him. Police have also added charges under the Unlawful Activities Prevention Act (UAPA), the key counterterrorism law.

In September, Tamil Nadu state authorities arrested a woman for calling the BJP government “fascist” on board a flight in the presence of the state’s BJP president.

In June, police arrested eight people in Bihar state, including five under the age of 18, for sedition, for playing and dancing to an “anti-India” song.

Journalists faced increasing pressure to self-censor due to threat of legal action, smear campaigns and threats on social media, and even threats of physical attacks. In August, the government withdrew its controversial proposal to monitor social media and online communications and collect data on individuals after the Supreme Court said it would turn India into a “surveillance state.”

State governments resorted to blanket internet shutdowns either to prevent violence and social unrest or to respond to an ongoing law and order problem. By November, they had imposed 121 internet shutdowns, 52 of them in Jammu and Kashmir and 30 in Rajasthan.

Civil Society and Freedom of Association

Authorities increasingly used the Unlawful Activities Prevention Act to target civil rights activists and human rights defenders. Police in Maharashtra state arrested and detained 10 civil rights activists, lawyers, and writers, accusing them of being members of a banned Maoist organization and responsible for funding and instigating caste-based violence that took place on January 1, 2018. At time of writing, eight of them were in jail, and one was under house arrest. A fact-finding committee, headed by Pune city’s deputy mayor, found that the January 1 violence was premeditated by Hindu extremist groups, but police were targeting the activists because of pressure from the government to protect the perpetrators.

The Indian government also continued to use the Foreign Contribution Regulation Act (FCRA) to restrict foreign funding for NGOs critical of government policies or protesting the government’s large development projects. Cases filed by NGOs challenging government decisions to suspend or cancel their FCRA were pending in court.

Numerous cases of rape across the country once again exposed the failures of the criminal justice system. Nearly six years after the government amended laws and put in place new guidelines and policies aimed at justice for survivors of rape and sexual violence, girls and women continue to face barriers to reporting such crimes. Victim-blaming is rampant, and lack of witness and victim protection laws make girls and women from marginalized communities even more vulnerable to harassment and threats.

Starting in September, numerous women in India’s media and entertainment industries shared their accounts on social media of workplace sexual harassment and assault, as part of the #MeToo movement. These public accounts, naming the accused, highlighted the failures of due process, lack of mental health services and support for survivors, and the urgent need to fully implement the Sexual Harassment of Women at Workplace Act of 2013, which prescribes a system for investigating and redressing complaints in the workplace.

In September, the government launched a national registry of sexual offenders, which would store the name, address, photo, fingerprints, and personal details of all arrested, charged, and convicted of sexual offenses. The database, available only to law enforcement agencies, raised concerns regarding data breaches and violations of privacy protections, including for individuals never convicted of a sexual offense.

In September, the Supreme Court lifted the ban on entry of women of menstruating age—between 10 and 50—to a temple in southern India, on grounds of nondiscrimination, equality, and women’s right to practice religion. This prompted protests from devotees, including women, who tried to stop girls and young women from entering the temple. The same month, the top court struck down an archaic law that criminalized adultery.

In April, the government passed an ordinance introducing capital punishment for those convicted of raping a girl under 12 years of age. The new ordinance also increased minimum punishment for rape of girls and women.

The ordinance was a response to the widespread criticism and protests after two prominent cases. In one, some leaders and supporters of the ruling BJP defended alleged Hindu perpetrators of the abduction, ill-treatment, rape, and murder of an 8-year-old Muslim child in Jammu and Kashmir state. The second was in Uttar Pradesh state, where authorities not only failed to arrest a BJP legislator accused of raping a 17-year-old girl, but also allegedly beat her father to death in police custody.

The ordinance was widely criticized by rights groups. However, in August, with parliament’s approval, the ordinance became law.

In December, the lower house of parliament passed the Transgender Persons (Protection of Rights) Bill, 2018. Rights groups and a parliamentary committee had criticized an earlier version of the bill for contradicting several provisions laid down in a 2016 Supreme Court ruling. Although the government incorporated several amendments in the revised bill, it failed to adequately protect the community, including transgender people’s right to self-identify.