KHARKIV, Ukraine: The Ukrainian President Volodymyr Zelensky visited the Country’s northeastern Kharkiv region on Saturday to honor the memory of the victims of the plane crash.

On Friday night, An-26 aircraft with 20 Cadets and seven Officers from the Kharkiv Air Force University on board crashed in the Kharkiv region, resulting in the deaths of 26 people.

“Mourning has been announced over the tragedy that occurred yesterday in the Kharkiv region. Four takeoffs and, unfortunately, three landings. Tragic statistics, which, unfortunately, led to the death of both cadets and crew,” President Volodymyr Zelensky said according to his Office. 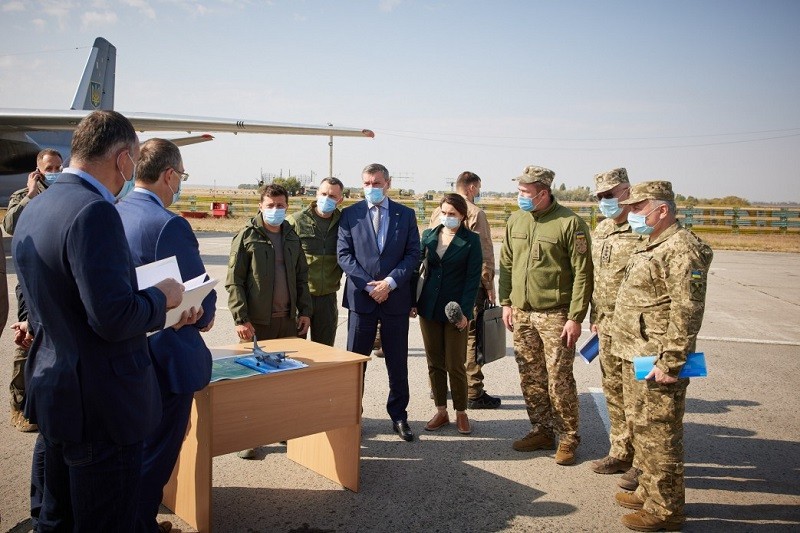 President Volodymyr Zelenskyy noted that the crash killed young men from the 2nd to the 4th year of study and members of the plane’s crew.

In the crash, only two people onboard the ill-fated aircraft had survived but received serious wounds. However, later one of them died.

“We had information that two boys survived. One – of medium severity. The second – doctors fought for him, but, unfortunately, in the morning we were told that he had died. My condolences to family and friends,” Volodymyr Zelensky said.

Immediately after the tragedy, the president held talks with Prime Minister Denys Shmyhal for the formation of a Commission to investigate the plane crash.

The Commission included representatives of the Ministry of Defense, the Ministry of Internal Affairs, the Prosecutor General’s Office, and the State Bureau of Investigation.

President Volodymyr Zelenskyy wants to receive information from relevant experts on the composition and technical condition of all military equipment in service in Ukraine.

“We want to see complete statistics of all our equipment,” the president said.

Meanwhile, President of the Republic of Poland Andrzej Duda, Prime Minister of Canada Justin Trudeau, High Representative of the European Union for Foreign Affairs and Security Policy Josep Borrell, the Foreign Ministers of Poland, Albania, Bulgaria, Turkey, Sweden, Latvia, and Moldova expressed their condolences with Ukraine over the An-26 aircraft crash.

Mati
Mati-Ullah is the Online Editor For DND. He is the real man to handle the team around the Country and get news from them and provide to you instantly.
Share
Facebook
Twitter
Pinterest
WhatsApp
Previous articlePakistan to become self-sufficient in medical equipment soon: Fawad Chaudhry
Next articleMushaal Mullick lauds Erdogan, Imran Khan for exposing Indian fascist face at global stage