UK to expand scope of its assistance plan for Pakistan: Envoy

ISLAMABAD, Pakistan: The British High Commissioner to Pakistan Thomas Drew on Wednesday said that United Kingdom would expand the scope of its assistance plan and assist Pakistan in diverse fields.

Talking to the Speaker National Assembly Sardar Ayaz Sadiq at Parliament House in Islamabad, the British envoy said that UK considers Pakistan one of its close friend and an important trading partner.

The High Commissioner assured the Speaker for extending maximum assistance for building of Legislative capacity of the parliamentarians and staff.

The envoy valued the efforts made by the parliamentarian regarding the electoral reforms for free, fair and transparent election in Pakistan for future.

While discussing the role of Parliamentary Friendship Group, he said that friendship groups in both the parliament could play an important role in strengthening bilateral relations. 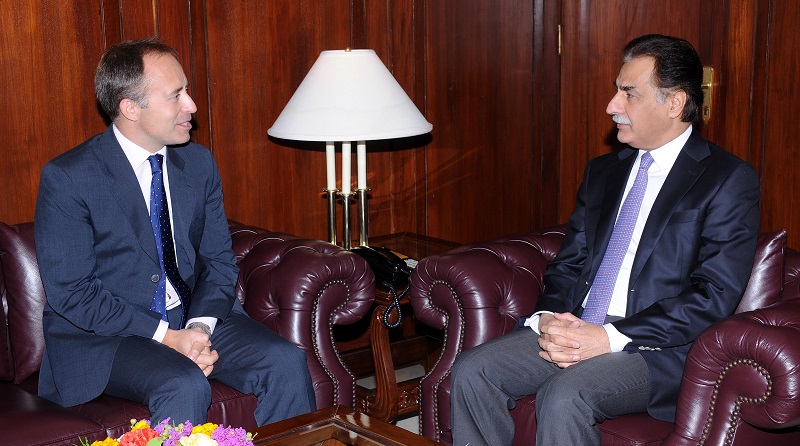 In his remarks, the Speaker said that Pakistan highly values its relations with UK and desire to strengthen the existing relations between the two Countries through enhanced economic cooperation and parliamentary ties.

The Speaker said that Pakistan attaches great importance to its strategic partnership with United Kingdom and both the Countries have commonalities of views on regional and global issues.

Sardar Ayaz Sadiq underscored the need for regular interaction between political leadership, parliamentarians and people of both Pakistan and UK that would take the existing bilateral relations between both the countries to new heights.

The Speaker also stressed the need for frequent exchange of Parliamentary delegations and stressed to re-activate friendship groups between the two Parliaments for better understanding and enhanced cooperation through parliamentary diplomacy.

In addition, he said that Pakistan is committed to promoting durable peace and stability in the region as regional prosperity and development is contingent upon peace in the region. He also added that Pakistan desires good relations with all its neighbors and is keen to promote exchange of parliamentary delegations and talks.

Mati
Mati-Ullah is the Online Editor For DND. He is the real man to handle the team around the Country and get news from them and provide to you instantly.
Share
Facebook
Twitter
Pinterest
WhatsApp
Previous articleChina says it will continue encourage eligible enterprises for business, investment in Pakistan
Next articleS&T Park to be established at NUST