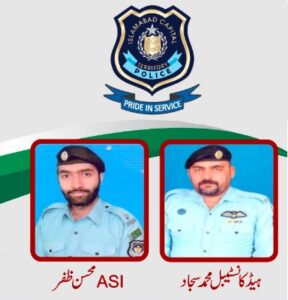 Both the Police Officials including Assistant Sub-Inspector (ASI) Mohsin Zafar and Head Constable Muhammad Sajjad were killed at Police Checkpoint in Chungi Number 26 area of Tarnol.

The Islamabad Deputy Commissioner Hamza Shafqaat also confirmed the martyrdom of Police Officials in Tarnol, and said that the killers are being traced.

The Islamabad Police has cordoned off the entire area and carrying out the search operation.

Sources said that apparently the ASI Mohsin Zafar and the attackers had a scuffle as the police officer had nail scratches on his face and his uniform was torn.

Mati
Mati-Ullah is the Online Editor For DND. He is the real man to handle the team around the Country and get news from them and provide to you instantly.
Share
Facebook
Twitter
Pinterest
WhatsApp
Previous articleOver 2,818 road accidents in Punjab on Eid Ul Fitr
Next articleThe “Indo-Aryan” is Fallacy of Modern History