ISLAMABAD, Pakistan: The Ambassador of Turkmenistan H.E Atadjan Movlamov has said that Pakistan is our brotherly Country and we attach great importance to enhancing cooperation with Pakistan in every possible sphere.

While speaking at a Seminar at COMSATS in Islamabad on Friday held in collaboration with Pakistan in the World journal and Sidhu Welfare on the subject of “Turkmenistan – Home of Year of Peace and Trust; 2021”, the ambassador said that Turkmenistan can provide 3000 Megawatt electricity to Pakistan on cheaper rates than that presently are in Pakistan.

The ambassador said that we feel no problem in Afghanistan to lay down the pipelines for gas and transmission lines for electricity meant to reach Pakistan. 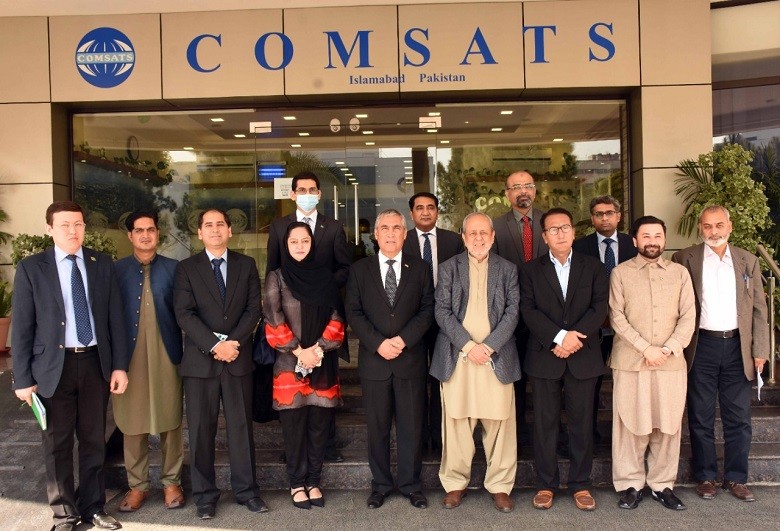 In his welcoming remarks, Tazeen Akhtar said that Turkmenistan moved a resolution at UNO in 2019, in which the world body was asked to declare 2021 as the year of peace and trust. The resolution was adopted with a majority vote. Turkmenistan earlier, in 1995, adopted a Neutrality policy and celebrated its silver jubilee last year. The UNO passed a resolution in 2017 in which respect for Turkmenistan’s neutrality was guaranteed. The policy of Neutrality from all blocks, political or military, helped Turkmenistan and Central Asian Republics to achieve progress and prosperity for their nations after independence from the USSR.

Tazeen Akhtar said that the resolution of conflicts demands a decision from a neutral party. It means neutrality leads towards the settlement of disputes and strengthening of peace and trust. Turkmenistan took lead in this regard only a few years after its independence. The Permanent Neutrality was adopted in 1995. Now Turkmenistan is moving forward with another milestone in the way of promotion of peace by getting the resolution on the year of peace and trust passed from the UNO. There are lessons for many countries that are still wasting their resources in conflicts and proxy from south Asia to the Middle East and beyond. Turkmen policy of Neutrality and Peace, Trust can be experienced in the case of Kashmir, Palestine as well where neutral mediators are needed and where peace is required badly before it is too late.

Ambassador R Fauzia Nasreen said that the Year of Peace and Trust is an opportunity for all to resolve their disputes and bring peace in the world that is necessary for development. She said that Pakistan was a co-sponsor of this resolution that speaks a lot about how valuable is peace in the foreign policy of Pakistan.

Ambassador Atadjan Movlamov shed light on Turkmenistan, Year of Peace and Trust, Turkmen-Pakistan relations in his presentation and during the question-answer session.

The ambassador said that Neutral Turkmenistan has established a constructive relationship of cooperation with its neighbors and is contributing to building a lasting peace through economic and humanitarian assistance, engaging Afghanistan in regional projects, and participating in international initiatives to rebuild Afghanistan, in particular through programs under the Regional Economic Cooperation Conference on Afghanistan and the construction of infrastructure projects like Turkmen-Afghan-Pak-India (TAPI) gas pipeline that is supposed to bring not only the energy but peace as well in respective countries.

“Turkmen- Afghan relations are a vivid example of how a neutral country can actively contribute to stability and development in the region. Taliban has assured the safety of our infrastructure for TAPI. Moreover, Turkmenistan is ready to provide 3000 Megawatt electricity to Pakistan that is already a populous Country and energy requirements are increasing rapidly with the pace of development,” he continued with details of the projects that were inaugurated last month by the Presidents of Turkmenistan and Afghanistan.

To a question regarding Afghanistan, the ambassador replied that Turkmenistan has been exporting electricity to Afghanistan for two decades, even when the Taliban were ruling there. Turkmenistan has never faced or felt any obstacle viz a viz the situation there. He simplified it as when foreigners come to Pakistan for the first time, their perspective is different but when they reach here, their opinion is different.

H.E Atadjan Movlamov said that Year of Peace and Trust means to mobilize international efforts to promote peace and trust among nations on the basis of political dialogue, mutual understanding, and cooperation in order to build sustainable peace, solidarity, and harmony.

To another question on prospects of tourism cooperation by Amna Malik, the ambassador answered that our Country is keen to enhance cooperation in this sector as well.

The ambassador shared the steps taken so far for the promotion of tourism in his Country and expressed deep interest in the exchange of experiences of both sides.

Mati
Mati-Ullah is the Online Editor For DND. He is the real man to handle the team around the Country and get news from them and provide to you instantly.
Share
Facebook
Twitter
Pinterest
WhatsApp
Previous articleRussian Presidential Envoy for Afghanistan meets Pakistan Army Chief
Next article‘Smokers spend 10% of average monthly income on cigarettes in Pakistan’