Turkey has become a popular and unrivaled tourist destination due to its rich culture and traditions as some of its interesting traditions are unlikely to find anywhere else in the world. Millions from around the world could be seen visiting each year to the country of the rich culture, historic sites, and awe-inspiring natural features.

It might be next to impossible to summarize Turkish culture and traditions in one article owing to its diversity of heritage and other cultures such as Greek, Armenian, Georgian, and Arabic that have also lasting impacts on the local culture and traditions. However, some of the most interesting traditions have been chosen that you are bound to come across at some point during your stay in the country.

Turkey is a transcontinental country located mainly on the Anatolian peninsula in Western Asia with a smaller portion on the Balkan peninsula in Southeastern Europe due to which a tight combination of Turkish and Georgian culture could be seen in the Laz and Hemsin communities on the northeast coast near the border, while on the southeast typically reflects Kurdish and Arabic culture. Similarly, the western coast has been widely influenced by European traditions.

However, a few traditions in Turkey are strong so much that they remained unaffected and intact despite these cultural invasions and any first time visitor will spot them immediately if they know what to look for. Therefore, the visitors should have prior understanding and knowledge about some of the important Turkish culture and traditions to make their journey more joyful and interesting.

Detail of some of these known cultures and traditions are given as under;

Turks love to celebrate or empathize and common expressions apply to many daily or special events and occasions. Should a friend fall ill, the response should be “Gecmis Olsun” meaning get well soon. Enter into a shop and you may hear the saying of “Hos Geldiniz” which means welcome. The list goes on and on but the good news for foreigners is that Turks are quite relaxed if you are visiting the country. Learning a few sayings earns you great respect, but do not sweat the small stuff, because to the Turks, you are a welcome guest in their country. 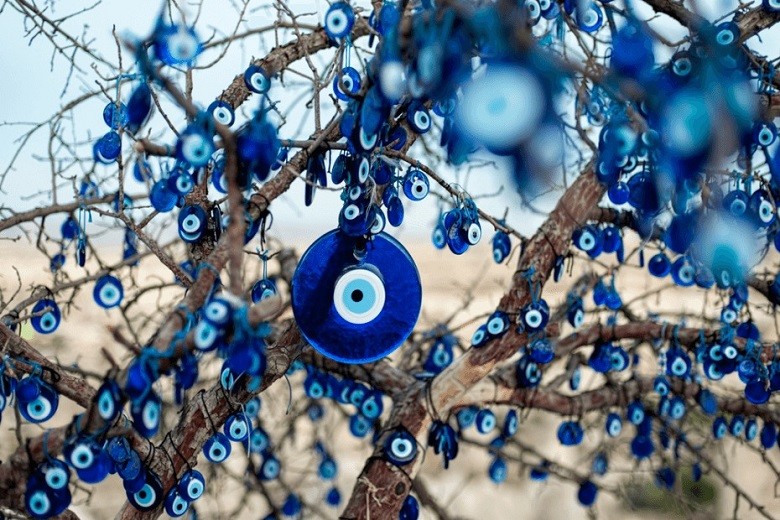 The Nazar Boncugu also known as the evil eye is in offices, homes, in transport and businesses. Turks believe this talisman wards off evil and these days, as well as featuring heavily in Turkish culture, it is one of the top recommended souvenirs to buy.

According to Turkish tradition, when a family wants their son to get married, they first visit the potential wife and her family at home in order to inspect and (if all goes well) ask for her hand. In these courtship scenes, it’s traditional for the bride-to-be to make Turkish coffee and serve it to her future in-laws, while they get to have a close look at her.

A celebration among the bride and her female relatives and friends before the wedding, the Henna Night traditionally involves the application of henna on the bride’s hands. A religious rite of passage, the henna traditionally symbolizes blood, which marks the bride’s transition from girlhood to womanhood. 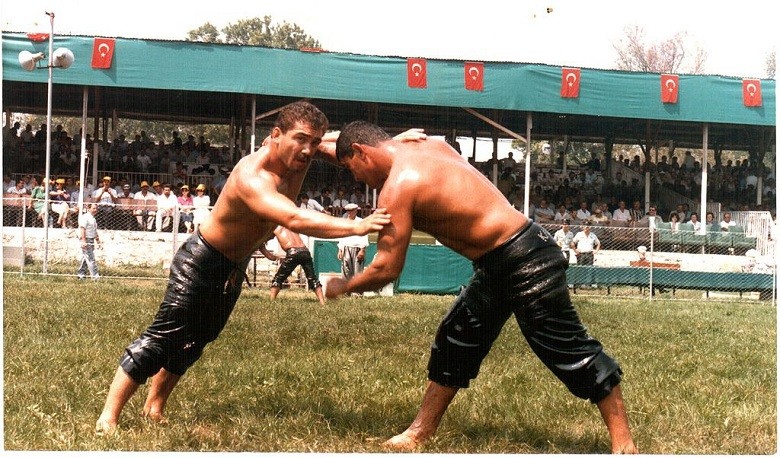 Oil wrestling is one of Turkey’s most traditional sports with roots that go all the way back to ancient Mesopotamia. During the famous Kırkpınar oil-wrestling tournament in Edirne, which has been held annually since 1362, the wrestlers douse themselves in oil and then wrestle until a loser is declared (when the navel faces the sky). Oil wrestling matches can go on for up to 40 minutes and for all the peculiar oiliness, can actually be quite captivating. 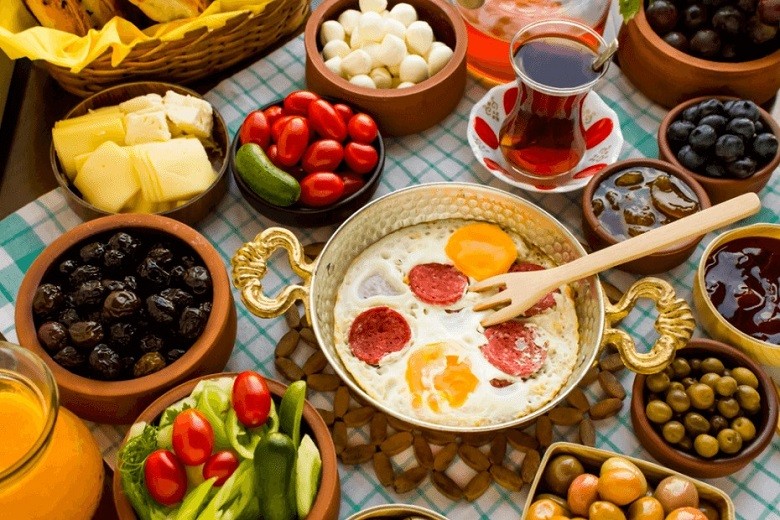 Food is an integral part of Turkish society. Each meal is a gift from Allah to enjoy, and not waste, so Turkish women often spend hours in the kitchen, with painstaking and intense recipes. Breakfast is the most important meal of the day and typically includes eggs, cucumbers, tomatoes, and olives but never forget the bread, at either breakfast or other mealtimes. It is a staple part of Turk’s diets and sold in masses across the country. Some Turks even refuse to sit down to a meal without it. 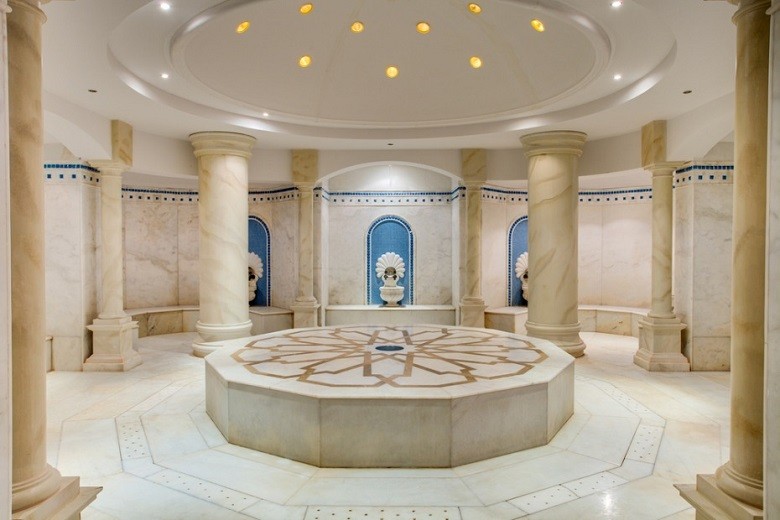 This tradition stemming from the Roman public bathhouses and modified by the Ottomans, has split into two. Certain Turkish baths are touristic orientated because westerners prefer to wear swimming costumes while others cater for the local community in the tradition way and this is seen in the weekly practice of women only day.

In every Turkish home, carpets and rugs sit proudly on the floors. With elaborate decoration, the handmade carpets have also become popular holiday souvenirs. Stemming from the days of the nomadic tribes, unfortunately, some rogue salespersons sell fake Turkish carpets. In recent years, as décor design has become more modern, some Turks also opt for the factory-made carpets that are often cheaper.

Turks are hospitable and often invite newfound friends around to their house for a dinner party. Visitors are given slippers, so they can leave their shoes at the door and copious amounts of food will be offered of which it is rude to refuse. During this time, a gift is not expected but if you intend to adhere to the popular western culture of bringing a bottle of wine, be sure to check whether the hosts drink. A lot are teetotal or only drink outside of the house. 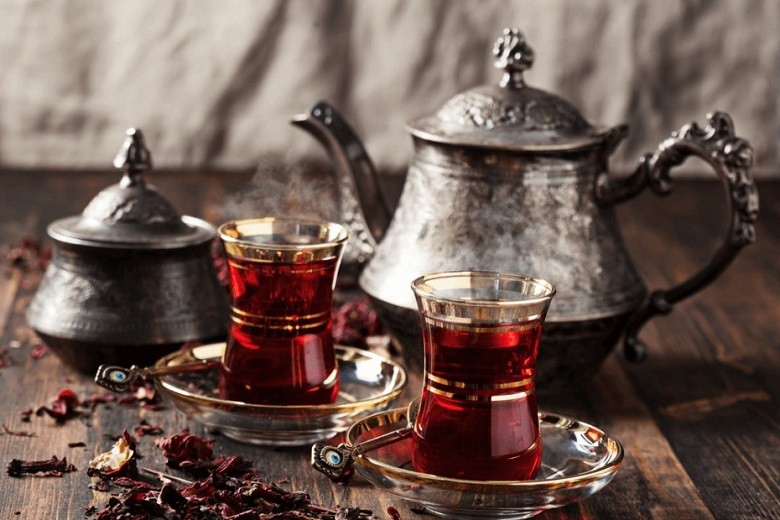 Contrary to popular belief, Turks only drink their version of coffee on a few days during the week. Instead, the national drink is tea, served black in tulip-shaped glasses and sweetened with sugar according to the drinker’s preference. Turkish tea is not just a strong dark red brew served in a tulip shaped glass, it’s a tradition that revolves around hospitality. Wherever you go in Turkey, it’s traditional to be offered a cup of Turkish tea as a sign of welcome, whether you’re at someone’s home, a shop, or even the hairdresser.

A common feature in most villages, towns, and cities are the men only teahouses where they gather to drink tea and play games such as OK. Otherwise, tea gardens are popular for families and females, especially on the weekends.

At the end of Ramadan, it’s traditional to sacrifice an animal and donate the meat to the poor. The adaklık kurban has become very popular in Turkey, and sacrifices can be made at other times as well, if for example, you want your daughter to get married or get a good job.