Trump did not blame Pakistan for failure in Afghanistan: US Envoy

ISLAMABAD, Pakistan: The US ambassador to Pakistan David Hale has clarified that the United States President Donald Trump did not blame Pakistan for failure in Afghanistan in his speech, he made on August 20 while announcing the new US strategy on Afghanistan and South Asia.

Talking to National Security Adviser Lt. General (retd) Nasser Khan Janjua in Islamabad on Thursday, the US envoy said that the press had generally taken the policy piece by piece instead of interpreting it as a whole.

Clarifying that President Trump did not blame Pakistan for failure in Afghanistan, he said that it was also wrong to assume that the policy recommended a purely military solution or that engagement with Pakistan had been ruled out.

David Hale said that military strategy was just one piece of the policy which espoused a political solution. 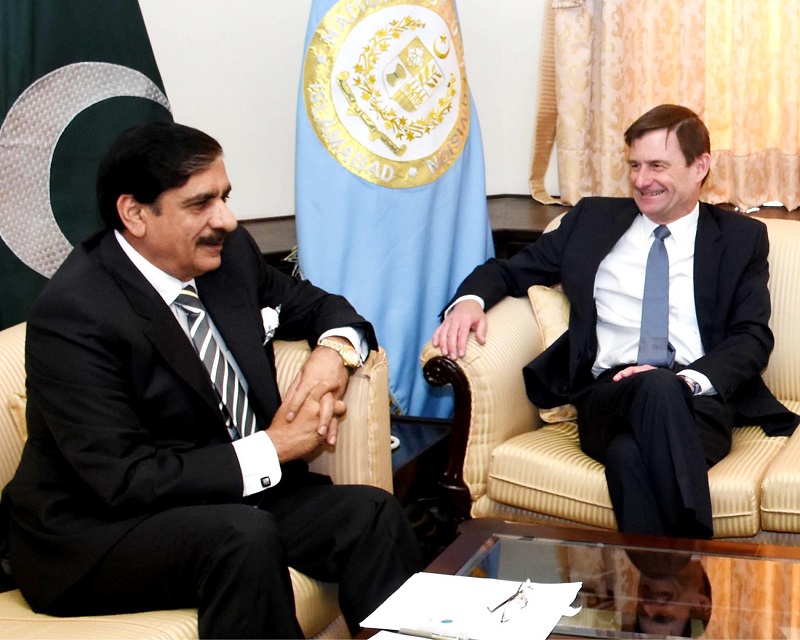 The US ambassador displayed a cooperative outlook and expressed his desire to work closely with Pakistan to find solutions.  He said that the policy supported the role of regional countries in a peaceful settlement where Pakistan had an important role to play.

The envoy said that the US was thinking of reviving and accelerating the Quadrilateral Coordination Group (QCG) and the Six-plus-One process on Afghanistan where Pakistan will have a leading role.

David Hale said that the United States recognized Pakistan’s sacrifices in the war on terror and hoped that it would continue to play its cooperative role.

The ambassador further clarified that additional troops in Afghanistan will be deployed as trainers of Afghan Armed Forces.

The US ambassador said that enhanced authority for decision making given to field commanders meant quick action against all terrorist groups including the Tehrik-i-Taliban Pakistan (TTP) who are enemy of Pakistan.

“Kabul Government had also been called upon to realign itself for playing its full role in controlling the insurgency and winning over the hearts and minds of its people while improving its governance,” he underlined.

Regarding the role envisaged for India, the ambassador said that the US government was aware about the feelings in Pakistan on this matter and was ready to play its role in reducing tensions between the two neighbours.

The US envoy further clarified that India’s role was envisaged for economic development only.

Thanking the US ambassador for the cooperative outlook, the security adviser said that Pakistan was taking its time to fully examine the new policy and considering all options and would like to receive further details from the US side.

Janjua said that President Trump’s address was disappointing and had deeply hurt the feelings of the government and the people of Pakistan. He said that Pakistan had been wrongly blamed, threatened and negatively projected to the world which was unacceptable.

The national security adviser said that Pakistan’s nuclear weapons were wrongly linked with terrorism which was totally uncalled for.

Nasser Janjua said that the new US policy has created uncertainties and further added to the regional fragility and imbalance. He said that that is why Pakistani people, the Parliament and the government had sharply reacted to President Trump’s statement.

The security adviser stressed the need for working together to stabilize Afghanistan. He said

We all should work together to “Seek the Closure of Conflict” in Afghanistan instead of winning it, he said. He added that victory in war resides in the way war is prosecuted.

Janjua identified faulty persecution of war in Afghanistan as the reason of rise in violence.

Furthermore he said that one should not try and win war in Afghanistan by way of vengeance as this will further spread the conflict and spiral things out of control.

Regarding the role envisaged for India in Afghanistan, the adviser said that creation of competitiveness with in a campaign and alliance is counter-productive. “We should not go that way,” he added.

Reiterating the risks and dangers of a purely military strategy, the security adviser suggested establishment of a parallel fully-empowered political authority by the United States in Afghanistan that would work in parallel to the military commanders to help find a peaceful, political solution to the conflict and bring the perpetual conflict in Afghanistan to a quick closure that was in the best interest of all parties.

The security adviser also clarified to the US ambassador that any kinetic action will further vitiate the situation and hence be avoided.

Both Nasser Janjua and the US ambassador reiterated to work very closely to find solution to seek the closure of this conflict in Afghanistan.

Mati
Mati-Ullah is the Online Editor For DND. He is the real man to handle the team around the Country and get news from them and provide to you instantly.
Share
Facebook
Twitter
Pinterest
WhatsApp
Previous articleFederal govt stands shoulder to shoulder with Karachiites: Ahsan Iqbal
Next articleImplications of Panama Papers Case