ISLAMABAD, Pakistan: President Dr. Arif Alvi held a bilateral meeting with the President of Uzbekistan Shavkat Mirziyoyev at Awan-e-Sadr in Islamabad on Friday and exchanged views on a wide range of issues of bilateral interest and important regional and international matters.

Talking to his Uzbek Counterparty, President Arif Alvi expressed satisfaction on the upward trajectory of Pakistan-Uzbekistan bilateral ties and reiterated the desire to promote multifaceted cooperation in all spheres, including political, trade, economic, defence, security, connectivity, education and cultural exchanges.

The president elaborated Pakistan’s efforts for enhanced engagement with Central Asia within the framework of the “Vision Central Asia” policy. 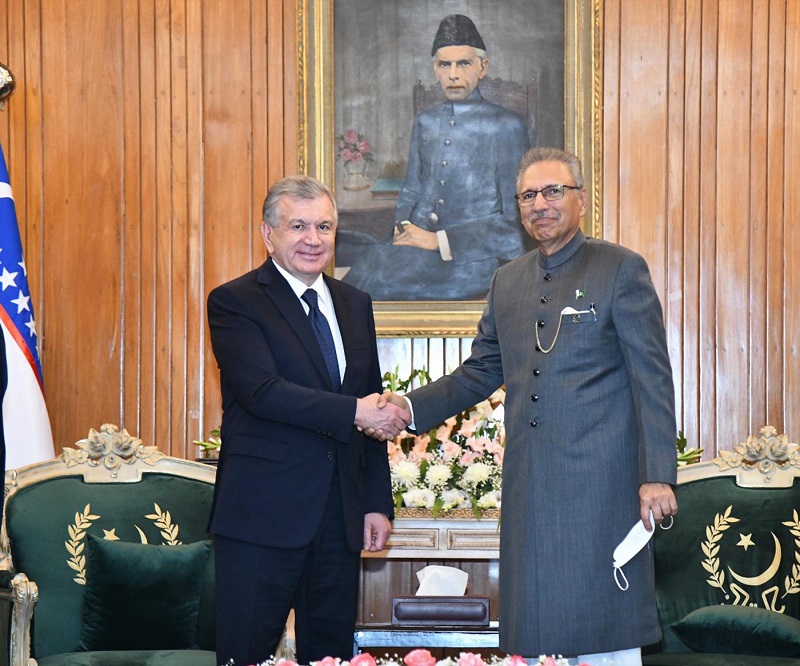 President Arif Alvi highlighted prospects of regional integration and connectivity to Uzbekistan and other Central Asian Countries through Pakistan’s seaports.

The president said that Trans-Afghan Railway would be one such project to establish consolidated land connectivity.

The president also underscored the importance of air connectivity for boosting tourism and people-to-people exchanges. Both the Presidents agreed to enhance cooperation between the youth and promote science and technology linkages between the two countries.

President Dr. Arif Alvi emphasized that peace and stability in Afghanistan was vital to reap the dividends of land connectivity.

President Arif Alvi said that a peaceful Afghanistan would contribute to the economic progress and prosperity of the region and beyond.

The president lauded the signing of the Joint Declaration on Next Steps in Strategic Partnership between Pakistan and Uzbekistan and MoUs/Agreements multiple areas.

The two leaders noted progress on collaboration in education, culture, security and defence and reiterated commitment to continue pursuing common goals of economic development at all levels.

The two presidents also discussed key regional and global issues of mutual interest and apprised his President Shavkat Mirziyoyev on the situation in Illegally Occupied Jammu and Kashmir (IIOJK).

The President of Uzbekistan is on his two-day first ever visit to Pakistan along with a high-level ministerial and business delegation.