ISLAMABAD, Pakistan: The murders of four people in Rawalpindi fueled a violent protest by infuriated people including the heirs of the victims, and they also blocked the Faizabad Interchange causing huge traffic congestions on all adjoining roads.

The firing incident took place between two groups in the vicinity of Sadiqabad Police Station which resulted in deaths of four people and injuries of five further.

The incident spread panic in the area and the traders shut their shops while the enraged people also created bottlenecks at the Faizabad Interchange and blocked it for all kinds of traffic.

They raised anti-police slogans saying that the firing occurred in an area which was just a few meters away from the Sadiqabad Police Station but police didn’t reach the site on time. 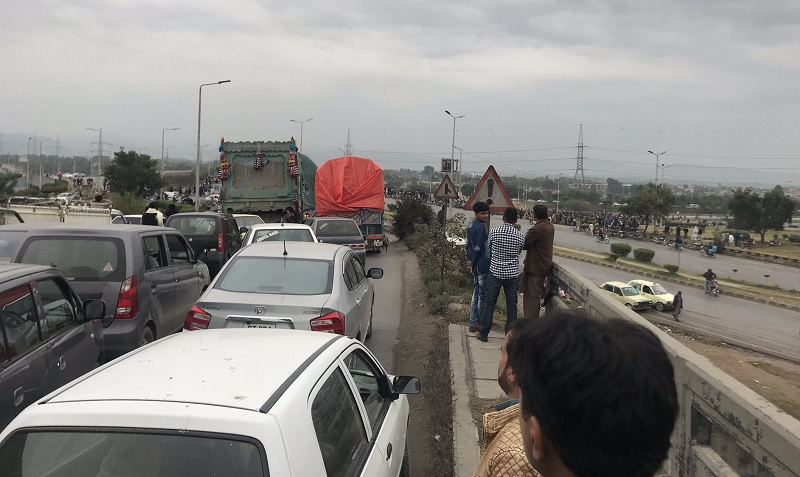 Sources said that almost four kilometers area in the radius of the Faizabad Interchange witnessed long queues of vehicles on all adjoining roads including Faisal Avenue, Islamabad Expressway, Murree Road and IJP Road.

Meanwhile, the Senior Superintendent of Police (SSP) Traffic Police Farrukh Rashid via his Twitter account advised the motorists to use alternate roads as a diversion had been placed at Faizabad for the traffic.

Mati
Mati-Ullah is the Online Editor For DND. He is the real man to handle the team around the Country and get news from them and provide to you instantly.
Share
Facebook
Twitter
Pinterest
WhatsApp
Previous articlePakistan greatly values Iran’s consistent support to it: President Arif Alvi
Next articlePresident Arif Alvi & PM Imran Khan felicitate Lebanon on Independence Day