The new Toyota Fortuner TDR is basically a sports model of the lineup, it offers some cosmetic improvements over the previous variants of the car.

The main highlights include a dual-tone roof, pearl white exterior color, the new extended front bumper with a skid-plate, an all-black grille with a TRD decal beneath the Toyota emblem, blacked out B, C and D pillars, some black trim around the fog lights, a black and white striped TRD decal that starts from the middle of the front doors on either side and runs up till the rear bumper and a new set of 18″ alloy rims. 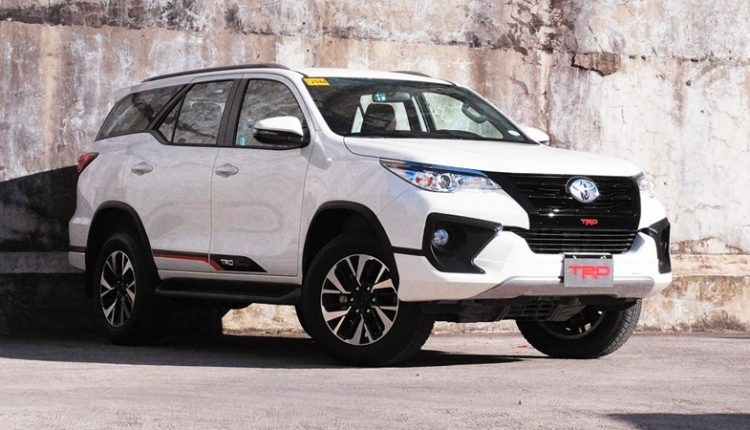 The Fortuner limited edition is based on the 2.8-litre diesel engine/automatic variants and is priced more than the regular trims, but the increased value is totally worth it, and the car is priced around Rs 9,390,000.

The car is based on the 2.8-litre turbocharged diesel engine which is about 180 horsepower at 3400 RPM.

Other than these upgrades, there is the aforementioned technology package brings along with it tyre pressure monitoring system, head-up display, 360-degree panoramic view monitor, illuminated scuff plates, auto-folding ORVMs on locking, new upholstery, and a wireless smartphone charger at the rear. An air ionizer too has been added to the equation.

As for other exterior enhancements, the grille as well as bumpers have been given the sporty TRD treatment.

A 6-speed gearbox with paddle shifters transmits power to the rear wheels.

The Fortuner is acclaimed for its off-road prowess and hence the added 4×4 helps its cause immensely. A 6-speed gearbox with paddle shifters transmits power to the rear wheels.

The Fortuner is acclaimed for its off-road prowess and hence the added 4×4 helps its cause immensely.

The price is a bit high but this is what was issued by Toyota IMC in April 2020.

Mati
Mati-Ullah is the Online Editor For DND. He is the real man to handle the team around the Country and get news from them and provide to you instantly.
Share
Facebook
Twitter
Pinterest
WhatsApp
Previous articleIndia launches FAU-G after PUBG ban
Next articleAli Zafar Sings ‘Aitebaar’ to Pay Tribute to Junaid Jamshed!