The Japanese-based multinational automotive manufacturer Toyota Motor Corporation has introduced the 12th Generation of its bestselling model Toyota Corolla. The car was globally launched at two exclusive events, California, USA and Guangzhou International Auto show, China. According to Toyota, “Toyota Corolla 2020 is aggressively designed to stand out among its competitors”.

The 2020 model has a lot of details resembling to 2019 Toyota Corolla introduced last year. It has the same Toyota New Global Architecture, general interior design and a new 2.0-liter four-cylinder engine. Toyota has also announced that for the first time ever, we will see a Corolla Hybrid. 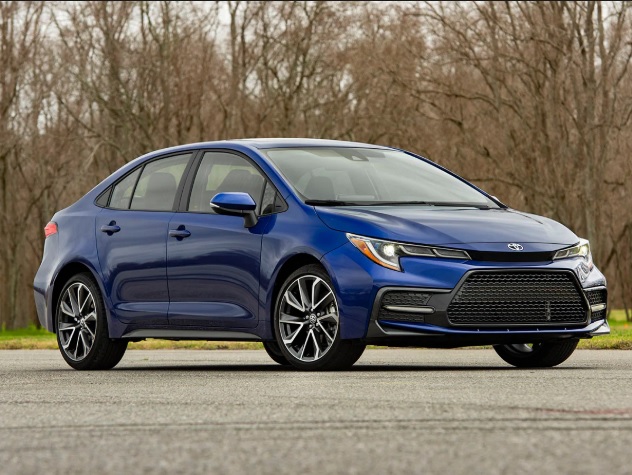 2020 Corolla can be considered dynamic when compared to the other sedans; the L, LE and XLE Corollas will come with conservative bodywork whereas the sportier versions of SE and XSE will carry some aggressive looks. Adaptive front lighting has also been introduced in the 2020 Corolla, which will steer the beam around the corners as the wheel is turned depending on the speed of the car. At the back, LED lamps are standard and design will vary according to the trim. The LE trim will feature 16-inch steel wheels whereas the XLE gets 16-inch alloy rims. The sportier SE and XSE trims will come with 18-inch wheels. Toyota has gone with a traditional cabin which is equipped with much more tech.

Safety features are as follows:

The 2020 Corolla sedan L, LE and XLE will be equipped with the same 1.8-liter four-cylinder petrol engine as before. However, the company is promising better power and fuel economy. The new 2.0-liter Dynamic-Force inline four-cylinder engine, with 169 horsepower and 151 lb-ft. of torque will only come with XSE and SE variants. The vehicle will be available in both a CVT and a six-speed manual transmission.

Toyota is yet to confirm the rest of the details which include the price and availability. There are no rumored price guesses at this point.

Mati
Mati-Ullah is the Online Editor For DND. He is the real man to handle the team around the Country and get news from them and provide to you instantly.
Share
Facebook
Twitter
Pinterest
WhatsApp
Previous articlePakistan’s High Commissioner to Canada Raza Bashir Tarar meets ICAO Secretary General Dr Fang Liu
Next articlePakistan FM leaves for London to attend Commonwealth Foreign Affairs Ministers’ Meeting