ISLAMABAD, Pakistan: The Japanese Ambassador to Pakistan Kuninori Matsuda has said that the Toyota Automobiles Company would invest US$ 100 million to produce the most advanced hybrid cars in Pakistan besides supporting companies to manufacture auto parts.

Talking to President Dr. Arif Alvi at Aiwan-e-Sadr in Islamabad on Monday, the outgoing Japanese ambassador said that Japan would hold Osaka 2025 Expo and requested Pakistan’s participation in the Expo.

The Japanese ambassador also apprised the President that Pakistan is one of the major exporters of fisheries and agricultural products including rice, dates, sesame, mango, guar gum, shrimp, and salt to Japan.

Kuninori Matsuda remarked that 2022 would mark the 70th anniversary of the establishment of diplomatic relations between Pakistan and Japan, and expressed the hope that both Countries would commemorate the anniversary in a befitting manner. 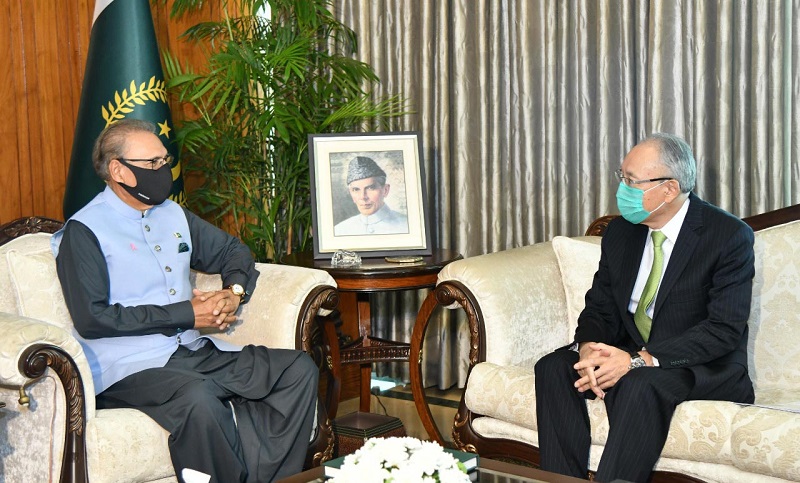 In his remarks, President Arif Alvi congratulated the outgoing ambassador on the successful completion of his tenure in Pakistan and appreciated his efforts in further solidifying Pakistan-Japan relations.

President Dr. Arif Alvi said that Pakistan attaches great importance to its bilateral ties with Japan and wants to further expand cooperation as there exist great prospects of furthering relations in various fields.

The president highlighted that Pakistan offers tremendous business opportunities and Japanese companies could benefit from the business-friendly environment in various sectors of the economy, especially in agriculture, automobile, Information Technology, textile, SMEs, and energy sectors.

Dr. Arif Alvi said that Pakistan and Japan enjoy excellent relations and both Countries need to further improve their ties in areas of mutual interest. He underscored the need for increased cooperation in the fields of skills and human resource development.

President Arif Alvi welcomed the decision of the government of Japan to include Pakistan in the JDS Scholarship Program under which 20 students from Pakistan would be provided the opportunity to take part in graduate courses in Japanese universities.

The president also recalled his visit to Japan in October 2019, saying that he held fruitful discussions with the leadership of Japan. He also appreciated the role of the Japan International Cooperation Agency (JICA) and Japanese companies that contributed to the development of Pakistan.