Today no concept in Pakistan of “strategic depth” in Afghanistan: PM Imran Khan

WASHINGTON: Prime Minister Imran Khan on Tuesday revealed that it was the Afghan government which didn’t want him to negotiate with the Taliban; however, now since he has talked to the US President Donald Trump and the Afghan President Ashraf Ghani, he would meet the Taliban and encourage them to initiate the dialogue process with the Kabul government.

In a question/answer session “A Conversation with Pakistani Prime Minister Imran Khan” at the United States Institute of Peace (USIP) in Washington, the prime minister said that today there is no concept in Pakistan of “strategic depth” in Afghanistan.

“We feel that pursuing that policy caused a lot of damage within Pakistan’s internal affairs,” Imran Khan said. 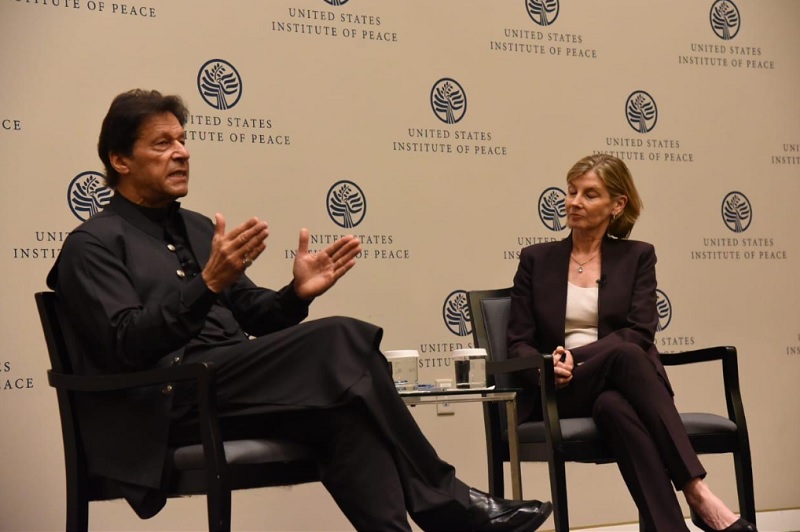 The prime minister said that today the government and the military leadership in Pakistan are on the same page with regard to the peace process in Afghanistan. He added that we should get all of Afghanistan’s neighbors involved in the peace talks.

“There will be people who will try to put a spanner in the works, so if all the neighbors are involved, things are more likely to go smoothly,” he was of the view.

In reply to a question about a solution for Kashmir and what Pakistan would want to see, Imran Khan said that what is important is what Kashmir wants.

When asked about the tensions between the United States and Iran, the prime minister said that the people don’t understand the gravity of the situation of a war with Iran, warning that it would be catastrophic for the world and for Pakistan.

Talking about the Pakistan-US relations, Imran Khan said that i would like to have a relationship with the US of mutual trust, as equals of friendship not as it was before, where it was transactional for aid.

“Now, we have a relationship based on mutual interest; peace in Afghanistan,” he said.

To a question about the recent detention of Jamaat-ud-Dawah (JUD) Chief Hafiz Saeed, the prime minister said that it is in the interest of our Country that we do not allow any armed militant groups to operate.

Furthermore, the prime minister said that i believe that the democratic evolution of the Country has reached the point that we will continue advancing democracy, not going back to bad democracy or military leadership.

Mati
Mati-Ullah is the Online Editor For DND. He is the real man to handle the team around the Country and get news from them and provide to you instantly.
Share
Facebook
Twitter
Pinterest
WhatsApp
Previous articleImran Khan thanks Donald Trump, assures Pakistan’s all out support in Afghan peace process
Next articlePakistan protests as Indian firing along LoC martyrs two civilians, injures four