NEW DELHI, India: The President of the Jammu and Kashmir Peoples Democratic Party (PDP) and the former Chief Minister Jammu and Kashmir (J&K) Mehbooba Mufti has said that today is the darkest day in Indian democracy, and added that the unilateral decision of the government of India to scrap Article 370 is illegal and unconstitutional which will make India an occupational force in the Valley.

Her statement comes as the Indian Home Minister Amit Shah while addressing the Rajya Sabha in New Delhi on Monday amid opposition’s outburst announced the scrapping of Article 370 – which grants special constitutional status to the Indian Occupied Jammu and Kashmir.

The Special Status under Article 370 allows the people of Indian Occupied Jammu and Kashmir to have its own Constitution, a separate flag and independence over all matters except foreign affairs, defence and communications. In addition to that, only residents are entitled to buy property and hold state government jobs in the J&K Valley. 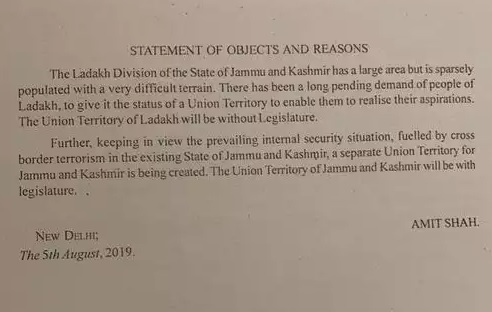 In a tweet on Monday, Mehbooba Mufti said that it will have catastrophic consequences for the subcontinent.

Mehbooba Mufti, who along with other Kashmiri leaders have been placed under house arrest, said that the intentions by the Indian government are clear. She said that they want the territory of J&K by terrorizing its people.

“India has failed Kashmir in keeping its promises,” she said.

The former Chief Minister J&K also said that the decision of Jammu and Kashmir leadership to reject two the nation theory in 1947 and alignment with India has backfired.

In real terms: the constitutionally mandated separate flag & separate constitution of Jammu and Kashmir along with other special provisions like barring outsiders from buying land or voting rights are now gone. There are no “state citizens” any more.

Darkest day in the history. The abrogation of #Article370 and 35 A by India.#KashmirUnderThreat pic.twitter.com/HkKf6HVcnC

Mati
Mati-Ullah is the Online Editor For DND. He is the real man to handle the team around the Country and get news from them and provide to you instantly.
Share
Facebook
Twitter
Pinterest
WhatsApp
Previous articleTECNO Spark Go Will Be an Entertainment Powerhouse
Next articleIndia-Pakistan Border Tension: UN appeals to exercise maximum restraint