Timeline of Indian propaganda against Pakistan from 2018-2020

ISLAMABAD, Pakistan: The arch-rival India has recently intensified its efforts to isolate Pakistan worldwide and orchestrated a propaganda campaign against it particularly its prime institution – the Pakistan army.

The Islamabad Policy Research Institute (IPRI) has compiled a timeline of the Indian propaganda hatched against Pakistan from 2018 to 2020.

The IPRI data indicates a pattern of the Indian propaganda against Pakistan on digital media that grew exponentially after the 2018 general elections in Pakistan.

It reveals that from August 2020 till date, one of the prime targets of the Indian propaganda is the Chairman of CPEC Authority Lt General (retd) Asim Saleem Bajwa.

The data reveals that the Indian propaganda has been revealing around 4 key themes; Campaign against the Pakistan army, stroking civil unrest in Pakistan, propaganda on Kashmir, and sabotaging CPEC.

The details are reflected in the below diagram: 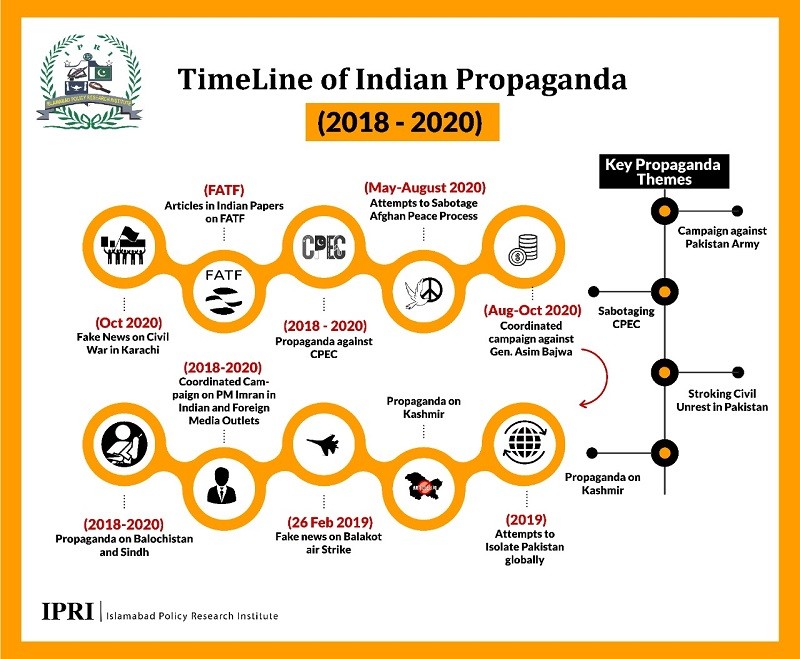 Mati
Mati-Ullah is the Online Editor For DND. He is the real man to handle the team around the Country and get news from them and provide to you instantly.
Share
Facebook
Twitter
Pinterest
WhatsApp
Previous articleAiman Minal Closet Photoshoot to Leave You Speechless! [Pictures]
Next articleAyeza Khan Looks Regal In This Winter Collection Photoshoot