A Journey of Muhammad Asad from Lviv to Lahore via Mecca

I have no great interest in Middle Eastern regional history or politics therefore hardly know detail history of Saudi Arabia.

While finding information, I came across an online book title “The Road to Mecca” written by Muhammad Asad. I thought it must be a travelogue and could be helpful for me but the more I read the book — the more I felt that it is something more than a travelogue or an autobiography.

The book enhanced my interest about its author (writer)—-Muhammad Asad.

The more I read about him, the more I was amazed. Oh My God— he was an untold or at least less known chapter of Pakistan Movement and he had unusual background.

Born as Jew in Ukraine, converted to Islam, arrested in Lahore, travelled to Saudi Arabia and died in Spain—-Oh what a Free Soul he was.

Do you know why did he opt Asad as his Muslim name?  Wait I will tell you

Because he was son of Lviv. The city name of Lviv is extracted from Лев—-Lion and his Ukrainian name was also Leo (Lion).

He was named Leopold Weiss (Леопольд) when he was born on July 2, 1900 in the then Austro-Hungarian Empire at Lviv, a city I fell in love at first sight when I visited it this year.

It may be mentioned that during the time when Muhammad Asad was born, Lviv was named as Lemberg.

Like renaming of Leopold Weiss as Muhammad Asad, the story of renaming Lviv is also very interesting. 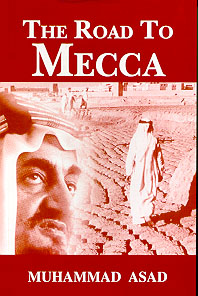 This city had been named, renamed and then again renamed several times according to desires of its rulers but all foreign rulers failed to take away its cultural identity and it regained rather reclaimed its original identity.

Muhanmmad Asad was a free-soul travelling, extensively and then landed in Palestine. After traveling across the Arab World as a journalist, he converted to Islam in 1926 and opted his name as “Muhammad Asad”. He had opportunity of staying in Saudi Arabia for a long time and then he travelled to undivided British India and landed in Lahore where he became popular among journalists and writers. Here he met great Muslim poet and philosopher Dr. Sir Allama Muhammad Iqbal who was living in Lahore.

Through Allama Iqbal, he became active in Indian politics and became closer to founder of Pakistan Muhammad Ali Jinnah. After the death of Allama Iqbal, he spent most of his time in Delhi and Bombay (Now Mumbai).

On August 14, 1947, Pakistan came into being and Muhammad Asad received Pakistani citizenship and later served at several bureaucratic and diplomatic positions including the Director of Department of Islamic Reconstruction, Deputy Secretary (Middle East Division) in the Foreign Ministry of Pakistan, and Pakistan’s Envoy to the United Nations.

Muhammad Asad would be remembered for his best-selling autobiography, “The Road to Mecca” while “The Message of the Qur’an—an English translation and commentary of the Holy Koran” is a controversial project and his translation is not advice-able by majority of Muslim scholars.

He dedicated his works “to People who Think”.

One can find an entrance square to the UN Office in Vienna after his name as “Muhammad Asad Platz” in commemoration of his work as a “religious bridge-builder”.

After living in several cities of Europe and America, Muhammad Asad decided to move to Spain and lived there till his death February 20, 1992 at the age of 91.

He was buried in the Muslim cemetery of Granada Spain.

He was surely a bridge between Ukraine, Middle East, Austria and Pakistan and his life story needs further research and documentation.