The Forgotten Genocide Of Sikhs In June 1984

Monitoring Desk: “The government of India planned the infamous attack on the holy shrine code-named Operation Bluestar which commenced on the 1st of June 1984 and ended on 8th June 1984.

Till date, the government of India has not initiated any inquiry into this genocide. Justice beckons the innocent victims. An International Investigation and Truth-seeking Commission should be set up and adequate compensation paid to the victims who aspired for a legitimate right to self-determination”.

This is indicated by Dr. Paul Newman in his article titled “The Forgotten Genocide Of Sikhs In June 1984” published by Eurasia Review News and Analysis on June 8, 2020. 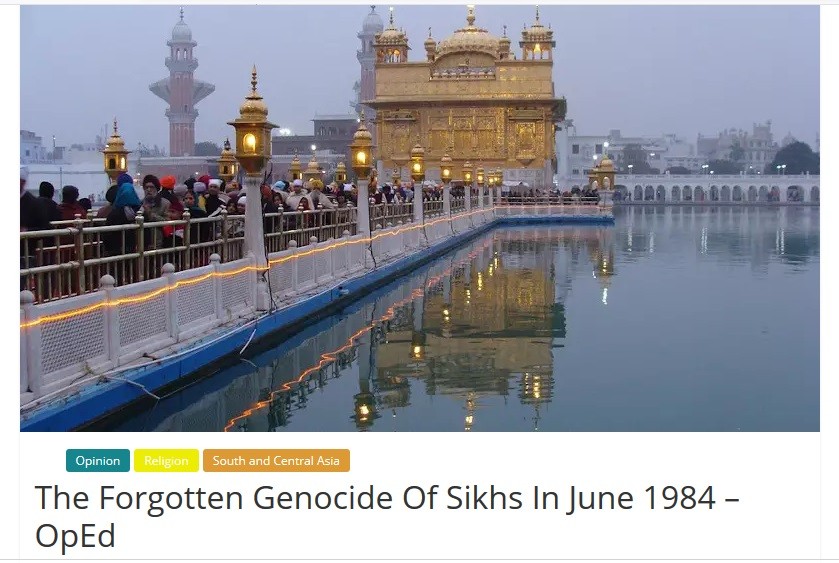 Dr. Paul Newman who is a famous Sri Lankan writer and holds a Doctorate of Philosophy writes that before the operation commenced, curfew was imposed in the entire state of Punjab, the entire Press was flushed out of the state, and many reporters were forcibly brought back to Delhi.

“Only three reporters managed to stay back and cover the unfolding of the genocide. Brahma Chellaney became the only foreign correspondent to cover this genocide for the Associated Press and his story was published in The Times of London. He wrote ‘several young Sikhs had been shot, with their hands tied behind their backs’. This report had quoted medical sources who conducted the post mortem.

The Sikhs who were holed up inside would not meekly surrender as expected by the Indian government. They fought till their last breath and the Indian army had seen its highest casualty in an internal conflict.  India used tanks to demolish the Akal Takht Sahib where Sant Jarnail Singh Bhindranwale and his close associates bravely fought the Indian army.

What was unpardonable was the gruesome killing of hundreds of innocent Sikh children and women, who were pilgrims visiting their most sacred religious site to commemorate the martyrdom day of the Fifth Master of the Sikhs -Guru Arjan Dev. The entire complex saw bodies in the walking path and blood of innocent Sikhs flowing in the holy Sarovar -the lake surrounding the sanctum sanctorum.  Fortunately, the sanctum sanctorum of the Golden Temple, even though it was hit by bullets and bombs, survived the bombing of the Indian army. A historic handwritten copy of Guru Granth Sahib -the holy scripture of the Sikhs had bullet holes.

Thousands of devout and committed Sikh youth took up arms to fight against this injustice meted out to the innocent victims of their community. For the next decade, Punjab was destroyed by the brutality of the armed forces and the police, where every Sikh youth was branded as a militant and the entire country ostracized the Sikhs conveniently forgetting that India inaugurated this genocide in June 1984 and it continued well till the end of the 1990s till the guns were silenced along with the lives of the innocent Sikh youth,” writes Dr. Paul Newman.

Writer says that an International Investigation and Truth-seeking Commission should be set up and adequate compensation paid to the victims who aspired for a legitimate right to self-determination.