The Fall of Kabul: An Elegant Way to Lose War

I agree with the views of Fareed Zakaria on GPS about the epic victory of the Taliban. But I would differ from the comment, “But the naked truth is: There is no elegant way to lose a war”.
In my opinion, there is an elegant way to lose a war: Gather courage, take a deep breath, put a bold face, and declare that after 20 years of massacres and brutalities and huge expense of human, material, and financial resources, you and your cohorts have miserably lost the war (the euphemism we have achieved the objectives holds no water.

An army that achieves its objectives leaves its foreign citadel with fanfare and laurels; it does not sneak out surreptitiously in the dark of night, switching off all the lights. And contingent upon a contingent of soldiers is not required to be rushed back into that erstwhile arena of your gallivanting, to extricate the remnants of your evil presence there). But that’s the easy part

The real challenge is to admit that your actions were wrong and rotten ab initio. All your allegations after 9/11 were blatant lies for which, to date, there is no solid evidence. These allegations are as good as the weapons of mass destruction you unearthed in Iraq…and in doing so you literally unearthed that beautiful country, you destroyed it brick by brick. This is your modus operandi to justify your lust for destruction, blood-letting, loot, and plunder.

This is what you did or tried to do in Libya, Syria, Vietnam, Cambodia, Philippines, Japan, Nicaragua, Panama and the list of your ventures goes on. Your very emergence on the world map was a death knell for the innocent and peaceful dwellers of that beautiful continent you call your home and a bastion of freedom and democracy. Today you stand on the high moral pedestal of virtue, made out of carcasses of that entire human species you so successfully and systematically eradicated from the face of the good earth. Your edifice of democracy is built on the homes and hearts of those decent native human beings you first annihilated and then spent all your looted wealth and wisdom in painting them as savage Red Indians. If they were savage, what adjective would you choose for yourself? I don’t have that eloquence of diction.
Those good souls were neither Red nor Indians. They appeared red because you had splattered their blood everywhere. You called them Indians as that was the most derogatory word in vogue then for the children of a lesser god. The times have changed though: Now the word Indian for you means strategic partners, brothers in arms. Fear the day when you face your perceived adversary. Your Indian brother in arms would cross sonic barrier in running away, leaving behind arms and shoes et all. You will be again left wondering, like you are doing today, as to what went wrong. You are neither good at selecting enemies, nor friends.

And this word Indians rings a bell. Your cousins up north are digging the unmarked graves of thousands of children plucked from the bosoms of their wailing moms by your cousins’ marauding forefathers, who, in the name of educating and culturing these uncouth and uncivilized urchins, put them in, guess what, Indian Residential Schools at what they so blatantly named British Columbia, after brutalizing the original inhabitants and depriving them of their ancestral homes. Here again, it was neither British nor Columbia. Why has the word Indian become synonymous with atrocities? Some soul searching is required. Thousands of children’s corpses have been unearthed so far, the process has just started. The descendants of these brutal murderers are at a loss of words to coin befitting apologies for the evil deeds of some of their ancestors. But by rendering this apology for the evil deeds of some of their predecessors, they have won the hearts of survivors and the world. This is an elegant way to lose a war, albeit a war started and concluded by their ancestors.

Unfortunately, at the moment there is an effort by some western countries to cobble political orphans into opposition to arrest the march of victorious Taliban into their rightfully earned place of leadership in Afghanistan. Their media is blaring images of chaos, confusion, and stampede in Kabul and blaming the Taliban for it. Whereas this is the mess created by the American and NATO Forces by their hasty, unplanned, and disorganized departure.

They left without informing even their sponsored Afghan government. There are appalling scenes of hordes of people running along with a taxying USAF airplane whereas president Biden has announced that they are taking control of Kabul Airport including Air Traffic Control. So, if people are running on to the runways or taxiways, they must take responsibility for it. Where are the marines? Definitely, in such a situation, people will be killed and the Taliban cannot be blamed for it. What could not be achieved by military means, is being sought through treachery, manipulation, propaganda, and disinformation. No lessons have been learned by the phenomenal meltdown of ostensibly well-trained and well-equipped Afghan defense forces.

The writing on the wall is very clear. The power will only be inherited by those who have the will to fight for their rights. Foreigners, mercenaries, charlatans, dummies stoked by their foreign backers, and puppets dancing to the tunes of their perpetrators will not stand the test of time. They will be blown by the first gust of freedom which has the power of people and force of conviction behind it. They are destined for the dust bin of history to which they would soon be confined.

Sorry, Fareed. You have presented the right arguments and statistics and beautifully concluded that the superpowers have lost the war against the poorest, most ill-equipped, and most severely outnumbered and outgunned warriors of the world. You may be able to convince them to admit their mistakes, for once, render a sincere apology and resolve to assist in rebuilding that poor nation they reduced to rubble through the most sophisticated and lethal weaponry of the world. The history might, then, perhaps, take a little lenient view of all those evil acts of the last two decades of destruction. Hopefully, the generous Afghans (read Taliban) would forgive them with the same poise and grace with which they sat with their tormentors, signed a peace deal, shook hands, and with slow steps walked back to their assigned seats. There was no chest-thumping, no bravados, not even a smile as if nothing significant happened. They even let it be named Peace Agreement. The world now is calling it a document of surrender, not by the Taliban. I wish you the best of luck. 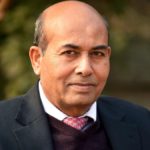 Basit Raza Abbasi is a retired PAF Officer with a keen eye on geopolitical and strategic developments. He is a senior analyst for TV programs on international relations and current affairs. His deep understanding of regional developments especially political changes and international realignments.