LAHORE, Pakistan: The globally eminent smartphone brand, TECNO, was the winner of the Fastest Growing Brand of the Year Awards 2021. Working hard to bring the best and latest technologies to its users, Camon 18 Series was the top-selling series of TECNO in the fourth quarter of 2021 due to its exceptional photography and camera features. 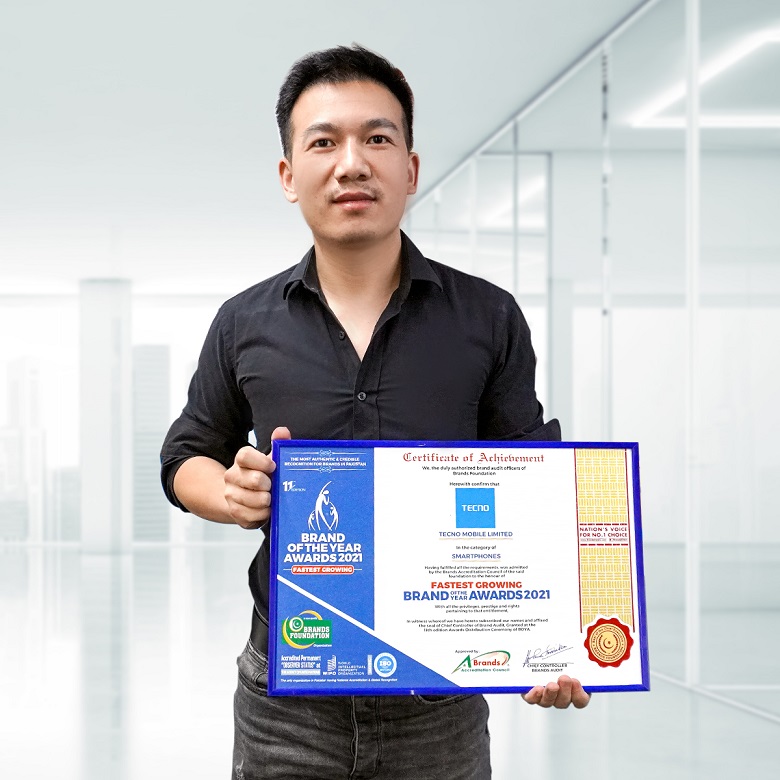 Brands Foundation, the organizer of “Brand of the Year Awards”, is the only non-profit public company in its area to conduct a healthy competition among Local, National, and Multinational Brands in Pakistan. The foundation conducts brands’ quantitative & qualitative surveys, focus group analyses, brands market studies, brands ratings, and brands audits.

After multiple phone launches, TECNO has successfully expanded its business from Africa to more than 70 countries and regions around the world. By adhering to its core strategy of “think globally, act locally” (Glocal), TECNO has reached millions of users worldwide.

The Management and Team Brands Foundation extend their heartiest congratulations to Team TECNO on their Achievement & well-deserved success. Kelvin Zeng, CEO of TECNO Mobile Pakistan expressed his joy on this occasion,

“We are overwhelmed by the appreciation and love we have received from our Pakistani consumers. The team has worked hard to deliver its best so that maximum people can be equipped with the latest technologies. Our upcoming Camon 19 Series will also be launched in Pakistan soon for which we expect the same zeal from the users.”

TECNO will be unveiling its new camera series in Pakistan with four different variants soon. The Camon 19 Series is much sort after and is expected to become a hot seller in no time.

Mati
Mati-Ullah is the Online Editor For DND. He is the real man to handle the team around the Country and get news from them and provide to you instantly.
Share
Facebook
Twitter
Pinterest
WhatsApp
Previous articleJazz signs agreement to fiberize its network across Lahore
Next articlePakistan remains deeply concerned at India’s continuing human rights violations in Kashmir: FO