ISLAMABAD, Pakistan: The President of Turkey Recep Tayyip Erdogan visited the Aiwan-e-Sadr in Islamabad on Thursday and met his Pakistani Counterpart Dr Arif Alvi, shortly after he arrived in Islamabad for a two-day visit, the Dispatch News Desk (DND) news agency reported.

Dr Arif Alvi extended a warm welcome to President Tayyip Erdogan and the First Lady Emine Erdogan, and expressed gratification over the level of enhanced and multifaceted engagement between Pakistan and Turkey.

President Arif Alvi said that the Sixth Session of the Pakistan-Turkey High-Level Strategic Cooperation Council (HLSCC) will further strengthen and broaden the fraternal relations between the two Countries. 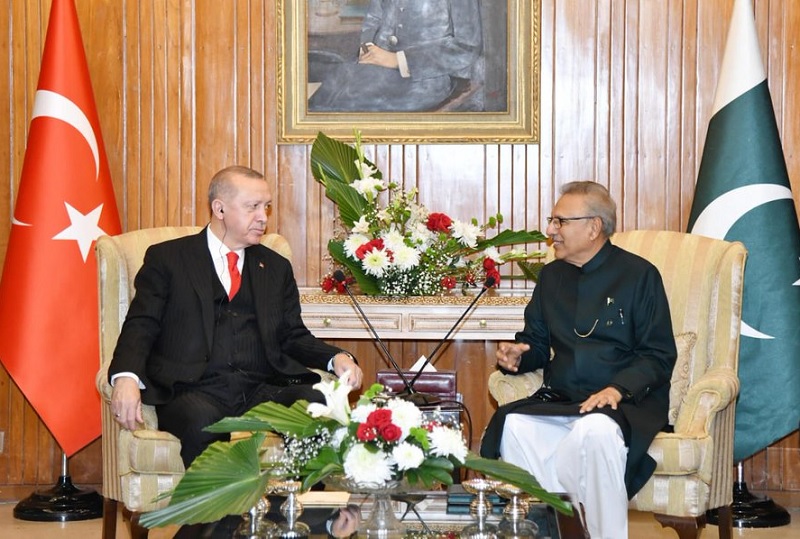 During the meeting, both leaders underlined the special significance of the historic bilateral relationship between Pakistan and Turkey in diverse areas including political, economic, cultural, defence and people-to-people contacts.

President Dr Arif Alvi apprised Tayyip Erdogan of the worsening human rights situation in the Indian Occupied Jammu & Kashmir (IOJ&K) and took the opportunity to thank the Turkish president for his principled stand on Kashmir.

The two leaders also exchanged views on regional and international issues. President Alvi highlighted Pakistan’s efforts for peace and reconciliation in Afghanistan and stressed that the world community should extend its help in Afghanistan’s post-conflict reconstruction.

The two presidents also agreed that Pakistan and Turkey must continue to work closely to counter challenges facing the Ummah including Islamophobia.

They also underscored the importance of fully realizing the immense potential of the relationship between Pakistan and Turkey and transforming it into a strong and dynamic trade and economic partnership.

Later President Arif Alvi hosted a banquet in honour of the distinguished guests.

Mati
Mati-Ullah is the Online Editor For DND. He is the real man to handle the team around the Country and get news from them and provide to you instantly.
Share
Facebook
Twitter
Pinterest
WhatsApp
Previous articleIndian police lodges fake FIR against protesting Muslims in Bihar
Next articleAzerbaijan’s Parliamentary Elections 2020: Live CBC TV Broadcast – Anastasia Lavrina