ISLAMABAD, Pakistan: The Turkish President Recep Tayyip Erdogan addressed the Joint Sitting of the Parliament in Islamabad on Friday, in which he emphatically stated to stick to his stance on the resolution of outstanding Kashmir dispute through dialogue and peaceful means on the basis of justice, the Dispatch News Desk (DND) news agency reported.

In his address which received thumping response from the lawmakers, the Turkish president said that our Kashmiri brothers have been living under difficult circumstances over the years; however, the recent unilateral steps by India have further added to the woes of the Kashmiri people and the situation has assumed alarming situation.

President Erdogan noted that depriving the Kashmiris of their freedom and usurping their rights is not in anybody’s interests.

Tayyip Erdogan said that the resolution of Kashmir dispute lies not in oppressive tactics but it warrants justice. He said that we feel for the Kashmiris the same way like the Muslims of this region felt for us during the Khilafat Movement.

The Turkish president also recalled that he had extended full support to the Kashmiri people at the session of the UN General Assembly.

Recep Tayyip Erdogan once again strongly rejected the US Middle East Plan saying that it is not a peace plan but aimed at occupying the Palestinian territory. He said that his Turkey has strongly reacted to the Middle East and it will stick to it. 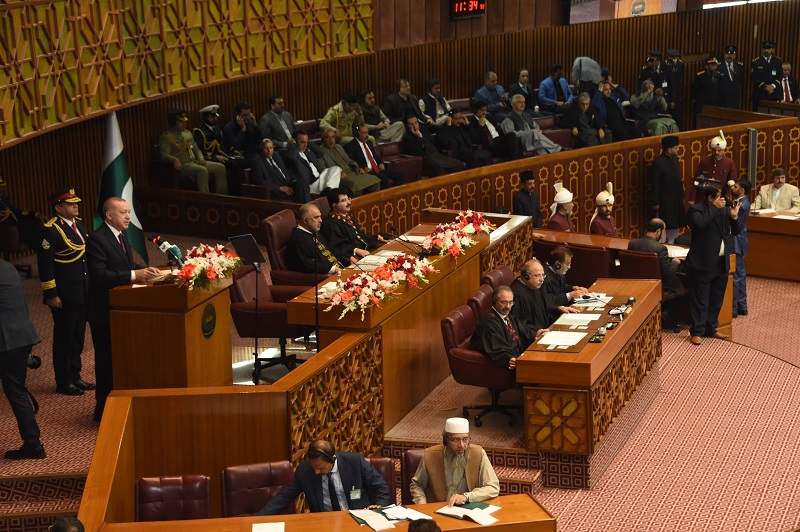 The Turkish president lauded Pakistan’s efforts for the peace and security of Afghanistan.

Hailing Pakistan’s efforts in the war on terrorism, Erdogan said the menace greatly affected the Country. He said that we are fully cognizant of the problems of Pakistan and will extend full cooperation including in its anti-terror efforts.

Erdogan said that Pakistan is faced with political pressure at the FATF and his Country will fully back it at the global forum. He said that Turkey will continue to support Pakistan on important matters as in the past.

Earlier in his welcome address, the Speaker National Assembly Asad Qaiser paid glowing tributes to the visionary leadership of the Turkish president.

Referring to the Indian atrocities in Occupied Jammu and Kashmir, he said that the entire Pakistani nation salutes the categorical stance taken by the Turkish president on the Kashmir dispute.

Asad Qaiser expressed the confidence that the visit of Recep Tayyip Erdogan will open new vistas of cooperation between Pakistan and Turkey.

Mati
Mati-Ullah is the Online Editor For DND. He is the real man to handle the team around the Country and get news from them and provide to you instantly.
Share
Facebook
Twitter
Pinterest
WhatsApp
Previous article2,707 persons studied abroad on government expenses in last two years
Next articleErdogan vows to take Pakistan-Turkey trade volume to US$ 5 billion