Taliban may have won a battle, but the war has probably not even begun

“Taliban may have won a battle, but the war has probably not even begun”.

This is indicated by M A Niazi in his column “Bloodied but unbowed” published in Pakistan Today on October 8, 2021.

He believes the rise of China creates a potentially unstable situation for the United States and US alignment with India is changing the dynamics of the region. “Pakistan has not taken sides with it against the USA, but it seems that it might be forced into it if the USA pursues it for helping the Taliban. India would want Pakistan to make this choice, as a complete realignment which accepts that the USA’s new alignment with India cannot continue with Pakistan aligned with the USA,” the writer commented. 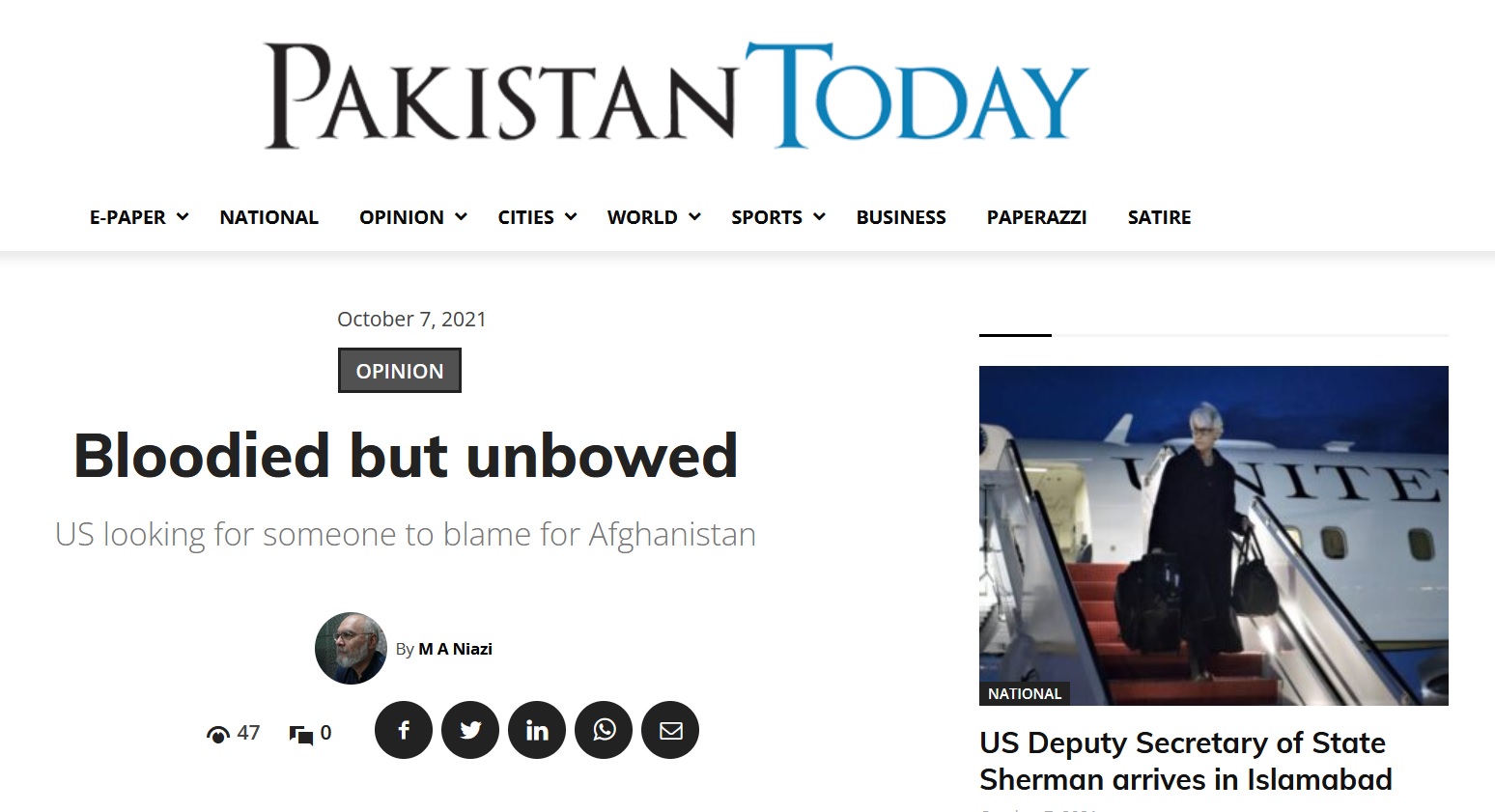 Hereunder is his full article:

American generals were on show in the US Senate Defence Committee hearings into the Afghanistan withdrawal, doing what military men inevitably do when they’ve been beaten: blame someone else. It is a very human trait to try and see that blame for an untoward incident does not stick to oneself. It is perhaps worse for military men than others, because defeat might mean that their country has suffered, and accompanying that, it might mean that their military career has come to an abrupt halt.

It is no coincidence that a bill has been introduced in the US Senate seeking to impose sanctions on the Taliban, and which demands a report on who, including which countries, helped them. That shows that the US military is flailing wildly, and wants to find someone, other than itself, to blame.

This reached the extent that in testimony by the Defence Secretary (himself a former four-star general), the Chairman Joint Chiefs and the CENTCOM chief, blame was assigned to President Biden for the botched withdrawal. Well, they didn’t go as far as accuse him, but they did say he had ignored recommendations to keep troops in Afghanistan.

That Biden chose to withdraw showed that he was not afraid to go against military recommendations. Actually, that expert recommendation was merely a repetition of the military solution that had proved wrong repeatedly over the last 20 years, to send in more troops. At the end of the day, the Taliban came back to power, and the whole enterprise, which had entailed driving them out militarily, and then building Afghanistan as a modern state. They failed. Someone had to be blamed, and it wasn’t the military.

Pakistan experienced such a moment 50 years ago, when the military passed on the blame for a defeat to politicians. Whoever was responsible for the secession of East Pakistan and the surrender at Paltan Maidan in Dhaka, it wasn’t the Army. It is possible for bad decisions by political masters to cause militaries to lose, but in 1971, Pakistan was ruled by the Commander-in-Chief, so the political direction was coming from someone who was supposed to be an expert. As a matter of fact, Gen Yahya Khan had had a reasonably distinguished military career. Similarly, the general responsible for East Pakistan, Lt Gen A.A.K. Niazi, also had a good career, which had included winning the Military Cross on the Burma Front in World War II. The only politicians involved in those events were Zulfikar Ali Bhutto and Mujibur Rahman, who took power after the War.

It may be that the US military can learn from the Pakistan military in this respect, because there is another country to blame. In this searching for excuses, Afghanistan has proved worse than Vietnam, or even the Soviet debacle in Afghanistan. In both cases, the local regime lasted longer, much longer, than the Karzai regime, which collapsed in a matter of days. It should not be forgotten that the US military had long withdrawn from Vietnam when the final collapse came; in Afghanistan, there had been one withdrawal, then a security operation to allow flights out, 13 personnel (out of 182) killed in a bomb blast there. It was messy.

There is a lot of rage out there in the USA. There was also much rage in 1975, when Saigon fell, and the disaster merged with the disaster in domestic politics that was Watergate. But while it was a loss in the Cold War, probably its worst loss, it was the first. Afghanistan joins Vietnam. All the intervening successes, basically Grenada and Panama, were balanced out by Iraq, Benghazi and Somalia. But Afghanistan has probably been the worst. There have been calls in the media for sackings of US generals. However, they will survive, and those lower down the line will rise to senior rank in the years to come. They will not like Afghanistan to be a blot on their copybook, but a credit, an advantage over those who were not part of the War

The problem is that the blame is being shifted to Pakistan when there are elements in it that are only too willing to take credit for the USA’s discomfiture. The problem comes because these elements are in conflict with those elements of the establishment that want a closer relationship with the USA. Because of the credit they are taking, they are strengthening the anti-Pakistani narrative within the USA. Historians have not had time to form an opinion, but US military men seeking to blame someone, anyone, might turn to Pakistan.

At the moment they are refraining, but the alternative, that of Afghan senior commanders’ corruption, raises questions about the training the USA was giving. Even that narrative is getting some pushback from Afghan generals, with Special Operations chief Gen Hibatullah Alizai, who became the last Ghani government Army chief, claiming that the troops had fought well. Since the Afghan National Army is to be partially included in the new Army, the Taliban is raising. Accusations of lacking will to fight will count for those who wish to build a career.

US generals and other military leaders will also face tough questions about whether the taxpayer is getting his money’s worth, what with $725 billion spent in 2020.The US military is not just responsible for defending the USA (with 9/11 showing it was not particularly good at that either), but projecting power abroad. That is a recognition that the USA has global interests, and thus global responsibilities. If the USA, despite vast expenditure, has not got a military machine that can do its will, then the whole world has got a problem.

The rise of China creates a potentially unstable situation. Pakistan has not taken sides with it against the USA, but it seems that it might be forced into it if the USA pursues it for helping the Taliban. India would want Pakistan to make this choice, as a complete realignment which accepts that the USA’s new alignment with India cannot continue with Pakistan aligned with the USA.

The US relationship is perhaps not as immediate a problem. More pressing is the impending amnesty talks with the Tehrik -e-Taliban Pakistan. The Afghan Taliban have already said that they have no control over the TTP, but the example they have set, of taking power, cannot be healthy for the present set-up. That the Afghan Taliban brought the USA to talks by inflicting losses on its forces in guerrilla warfare, without defeating them in pitched battle even at the end of the fighting, will indicate to them that their method is correct. It should be noted that the TTP has included the Chinese among their recent targets. Is it a coincidence that the Army and the Chinese, India’s biggest bugbears, are among their targets?

There is the danger of overreach. The USA had its confidence shaken by Vietnam. Its defeat in Afghanistan was equally demonstrative of its limitations. However, to assume that this means it is weak is to overestimate one’s strength. That is a mistake that should be avoided, as it will inevitably lead to more of them.

It should be noted that the USA has not given up in Afghanistan. Clausewitz famously said, “War is a continuation of policy by other means.” As war has not worked, the USA must return to other means, like economic pressure, to press for its agenda. The treatment of women is supposed to be on it, but it really means ensuring that terrorists do not get a refuge there.

One problem is that much as the USA dislikes it, the Taliban did win, and would like to follow the policies they want, not the ones the USA imposes.

But much as there may be schoolboy delight at US discomfiture, the real world, the adult world, intervenes. And the USA remains very powerful. It is at moments like these that it is most important to realize that US military power is not the greatest element of its power. The Taliban may have won a battle, but the war has probably not even begun.