ISLAMABAD, Pakistan: A six-member Afghan Taliban delegation led by Mullah Abdul Ghani Baradar arrived at the Ministry of Foreign Affairs in Islamabad on Tuesday to discuss the way forward to the Afghan peace process.

The Foreign Minister Shah Mahmood Qureshi led the Pakistani delegation in the talks. 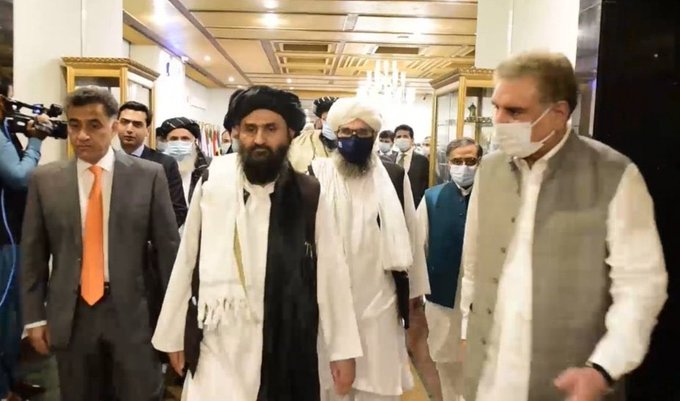 In the talks, the two sides exchanged views on various issues of mutual interest including recent developments in the Afghan peace process, and expeditious convening of the intra-Afghan talks.

The Afghan Taliban delegation apprised the foreign minister on the latest situation regarding the implementation of the Taliban-US peace deal.

Talking to the delegation, Shah Mahmood Qureshi said that from day one, Pakistan has maintained that a lasting and durable solution to the Afghan problem is possible only through the Afghan-led dialogue process.

The foreign minister said that Pakistan has been playing its conciliatory role in the Afghan peace process under a shared responsibility.

Qureshi said that Pakistan’s sincere reconciliation efforts yielded fruits in the form of a peace agreement between the United States and the Afghan Taliban in Doha on February 29.

Shah Mahmood Qureshi expressed hope that the Afghan leadership will take full advantage of the peace deal and ensure a stable and peaceful Afghanistan.

The minister further said that Pakistan is desirous for the early start of intra-Afghan talks to ensure the establishment of peace and stability in the region. He reiterated that Pakistan would continue to endeavor for peace in Afghanistan.

The foreign minister also cautioned the Taliban delegation about the potential threat from ‘spoilers’ bent upon sabotaging the Afghan peace process.

The Afghan Taliban delegation thanked the foreign minister for Pakistan’s continued efforts and sincere support in the Afghan peace process.

Mati
Mati-Ullah is the Online Editor For DND. He is the real man to handle the team around the Country and get news from them and provide to you instantly.
Share
Facebook
Twitter
Pinterest
WhatsApp
Previous articlePresident Arif Alvi urges World to hold India accountable for suppressing Muslim minority
Next articleBTS Releases Blooper-Filled ‘B-Side’ Video For ‘Dynamite’