Huge response has so far been received by the T10 League in UAE where jam-packed Sharjah Cricket Stadium was observed during the group stage.

Today Play-off stage will begin and all six teams will be in action again, battling to qualify for Semi Finals scheduled on Sunday.

Kerala Kings and Pakhtoons kicked off their journey in T10 Cricket League 2017 with victories on December 14 but the losers Bengal Tigers and Maratha Arabians bounced back yesterday and won their matches on the second day of the tournament. 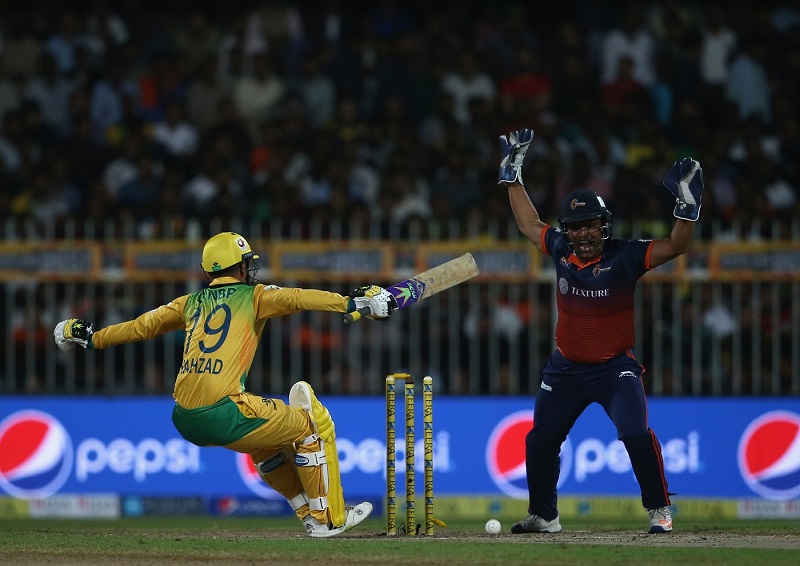 The event’s fourth match played between Maratha Arabians and Team Sri Lanka was a thriller which ended in the last ball. While batting first, Team Sri Lanka put 124 runs on the board for the loss of 4 wickets. The Captain Dinesh Chandimal scored 37 runs with 154.16 strike rate, Shehan Jayasuriya scored 28 runs with 254.54 strike rate while Ramith Rambukwella scored 22 with a strike rate of 220.00.

In reply, Maratha Arabians reached the target for the loss of 5 wickets. Rilee Rossouw played a special knock and scored unbeaten 49 runs with 6 sixes. Alex Hales and Roelof van der Merwe were the other top scorers for Maratha Arabians with 32 and 25 runs respectively.

Earlier in the third match of the tournament, Bengal Tigers successfully chased the target of 100 runs with four balls remaining against Punjabi Legends. For Punjab Legends, Umar Akmal was the highest scorer with 38 runs whereas for Bengal Tigers, collective performances played a more pivotal role in team victory.

However, Punjab Legends later settled the score by beating Kerala Kings by 8 wickets in the fifth match of the event. Punjab Legends Captain Shoaib Malik’s unbeaten 60 runs innings helped his Side to secure 2 important points while chasing 115-run target.

Mati
Mati-Ullah is the Online Editor For DND. He is the real man to handle the team around the Country and get news from them and provide to you instantly.
Share
Facebook
Twitter
Pinterest
WhatsApp
Previous articleCentral Asian countries busy in planning to combat possible attempt of Daesh to enter Central Asia
Next articleLHC annuls appointment of Absar Alam as Chairman PEMRA