Monitoring Desk: In a daring move, PTV anchor Jawad Faizi reached inaccessible areas of Taunsa Sharif that are inundated and virtually cut off from the rest of the country.

Anchor of Current Affairs Show “Chotha Satoon”, Jawad Faizi along with his PTV team reached flood-hit areas of southern Punjab and recorded the reality on the ground of what the Punjab government has done with victims of floods who are sitting on roads under the open sky and waiting for help. 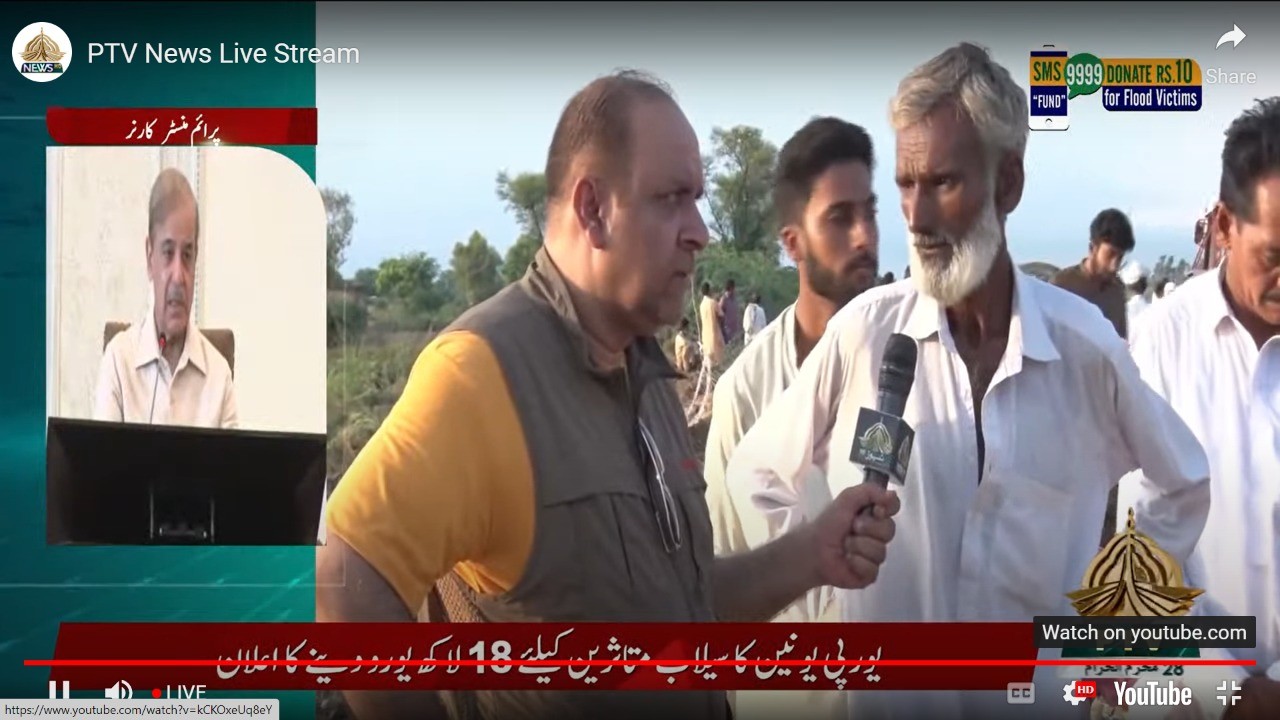 From the area of Nari Taunsa Sharif is a constituency of former Chief Minister Buzdar Khan, Jawad Faizi along with his team Shafqat Malik (from PTV Multan) and Cameraman Arslan (Islamabad) did a special report that exposed the realities from the ground. The show is Produced by Saadullah Khan (Islamabad) while Aun Sahi is the Director of Current Affairs.

Victims while talking to Jawad Faizi were of the view that they are living without tents and shortage of medicines and food. Over 90 percent of the population has lost their livelihood, livestock, homes, and almost every belonging they gathered to live in poverty. Victims informed the PTV team that nobody from the provincial government including former CM Buzdar Khan (who is the MPA of the area) and sitting CM Pervaiz Ellahi bothered to visit them although Prime Minister Mian Shabaz Sharif visited the flood-hit areas.

PTV correspondent from D.G Khan Asif Razak while talking to the anchor said that people have lost everything they had in their lives and they need immediate help to avert the future disaster of possible deaths due to water-borne disease and hunger. He said that land would not be in a position to produce crops for the next couple of years because the flood had spread hard soul full of pieces of rocks of Koh-e-Suleman. The district administration claimed that crops on 123,000-acre lands have been destroyed.

It may be mentioned that mainstream media is yet to come out of their offices and reach flood-hit areas and Pakistani media is facing serve criticism for not exposing the flood disaster and is still busy with political shows. Victims were appreciating PTV to reach the inaccessible area and showed agonies what they are facing today without any help.