According to details, the decision was taken during a meeting of AZERTAC`s Chairman of Board Aslan Aslanov with DND Chief Editor Agha Iqrar Haroon here on Friday.

Aslan Aslanov during the meeting emphasized that people of Azerbaijan and Pakistan were (are) bound together by close ties of friendship and brotherhood. 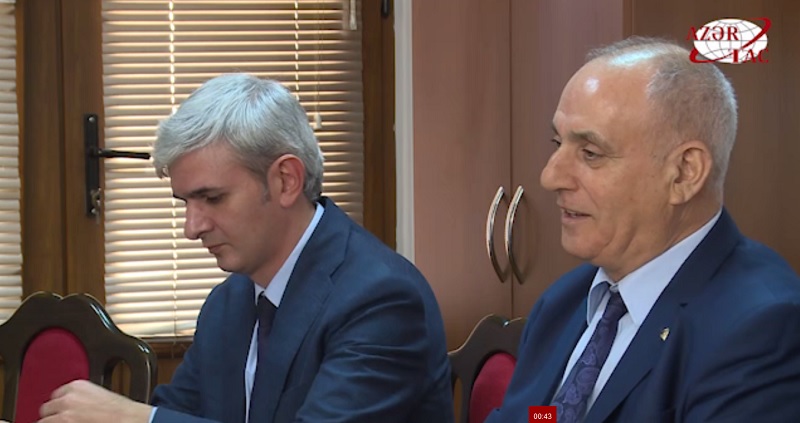 He noted the role of media in expanding cooperation between the two countries. Aslan Aslanov thanked Pakistan for supporting Azerbaijan`s territorial integrity, saying Pakistan always condemns Armenia for occupying 20 percent of Azerbaijani lands and does not recognize this country internationally.

“We consider it necessary to expand the exchange of news with Pakistan, one of the most powerful countries in the region. This will play a key role in bringing our nations closer to each other and promoting our societies` awareness,” said Aslan Aslanov.

“Cooperation with DND will be a positive step towards boosting news delivery,” he added.

“The fact that the two countries support each other`s territorial integrity is a crucial factor in the bilateral relations.”, commented Haroon.

Haroon was of the view that Azerbaijan always stands with Pakistan at international forums to protect the cause of Kashmir crises while Pakistan as a state and Pakistanis as a nation stand with Azerbaijan to condemn Armenian illegal occupation of Azerbaijani land.

It is pertinent to mention that the Dispatch News Desk (DND) is the only tri-lingual online publication from South Asia, providing news, articles, opinions and comments in Urdu, English and Russian languages while AZERTAC is a major news and information agency of the Republic of Azerbaijan, and the only source of the official government news.

AZERTAC, founded by the Government of the Azerbaijan Democratic Republic on March 1, 1920, functioned under various names during the Soviet period.