LAHORE, Pakistan: The Peoples’ Commission for Minorities’ Rights (PCMR) and the Centre for Social Justice (CSJ) have condemned the non-consideration of the “Prohibition of Forced Conversion Act 2021” by the head of the Parliamentary Committee for the Protection of Minorities from Forced Conversion.

Speaking at the Press Conference held under the aegis of the PCMR and the CSJ in Lahore on Saturday, Justice (retd) Nasira Iqbal, Khawar Mumtaz, Fatima Atif, advocate Kalpana Devi, Michelle Chaudhry and Nabila Feroz Bhatti called on Prime Minister Imran Khan to take cognizance of this extreme form of gender based violence and a violation of the norms of freedom of religion. 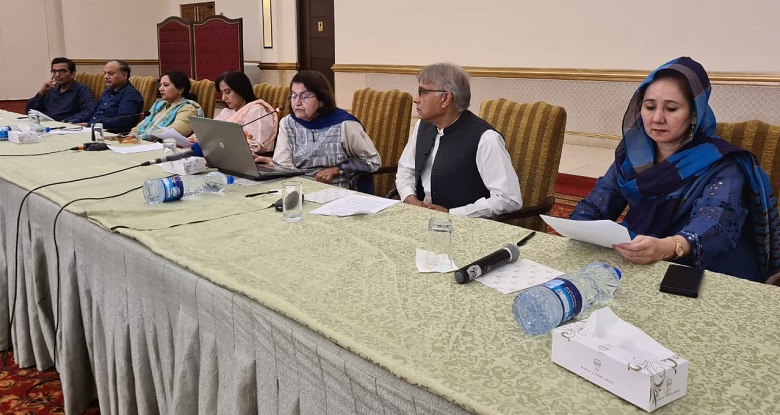 The speakers categorically and unanimously termed the blocking of the legislation to stop forced conversions a regressive step.

The panelists challenged the position taken by the Council of Islamic Ideology, on the ground that it was beyond its legal and constitutional mandate, moreover in violation of the procedures specified in the law, for their input.

“I am dismayed to observe that religion is yet again being used to defend the abuses against minority women and children. In fact, it is a huge disservice to religion in the current context, to try to cover up heinous crimes perpetrated against minor girls of the minorities in Pakistan,” said Nasira Iqbal.

Khawar Mumtaz, the former Chairperson of National Commission on the Status of Women, and human rights activist stated that the doubts raised about draft bill seem to be misplaced and deliberately planted to undermine the religious freedom of citizens.

“The draft bill formerly approved by the Parliamentary Committee, now derailed by the Ministry of Religious Affairs, was to address the forced conversions of minority women and children. Therefore, it should not be a cause of concern for the self-appointed custodians of majority faith.”

“The leadership of the Parliamentary Committee has failed to live up to its mandate because it was set up on the instruction of the prime minster about two years ago to address forced conversions. By saying that administrative steps will be sufficient they have admitted to being incompetent of doing what they were asked to do,” said Fatima Atif, a veteran human rights defender.

Earlier, the Centre for Social Justice, an organization affiliated with the PCMR had issued its research report titled, Silence of the Lamb III which revealed that the phenomenon of forced conversion and marriages of minor girls from the Hindu and Christian community was not limited to Sindh and Punjab but present in other parts of the country.

According to the report, the highest incidences of alleged forced conversions (51.85%) was reported in Punjab, 43.83% in Sindh, 1.23% in Federal and Khyber Pakhtunkhwa each while one case was reported in Balochistan.

Nabila Feroz Bhatti, a child rights expert and columnist observed that government has missed out totally the gravity of the issue.

“The concerned ministries of the federal government need to realize that forced conversions and consequent forced marriages are gross human rights violations under the national and international laws. Therefore, the opposition to the protective legislation against forced conversion brings no gains to the Country,” said Nabila Feroz Bhatti.

Kalpana Devi, a lawyer and activist from Sindh stated “Unfortunately the Parliamentary Committee failure to approve legislation on the bill itself makes the non-Muslim girls and women, vulnerable and unsafe. The criminals will be emboldened. Therefore the powerful voices need to speak up to strengthen the prospects of rule of law in the Pakistan”.

Michelle Chaudhry, the Director of Cecil and Iris Chaudhry Foundation, said that the prime minister’s assurance after the resistance of a handful of clerics in Karachi reflected a lack of commitment to justice and rule of law.

The Chairperson of PCMR Peter Jacob demanded that the government of Pakistan and the political parties should convince the Ministry of Religious Affairs to immediately organize a dialogue among the stakeholders and revisit their position with regard to the draft bill.