Speech of PM Imran Khan at UNGA: If conventional war starts between two nuclear armed countries, it can lead to anywhere

NEW YORK: While addressing the 74th Session of the United Nations General Assembly (UNGA) in New York on Friday, Prime Minister Imran Khan asked the global body that “If a conventional war begins between two nuclear armed neighboring countries Pakistan and India, and a country seven-time smaller than the aggressor what kind of option left for the smaller country? what would be option for Pakistan? surrender or fight till death?”.

“And we would go with the second option”, Imran Khan himself replied as he was advocating the case of Kashmiri Muslims who have been facing genocide like situation in Indian Occupied Jammu & Kashmir (IOJ&K) since New Delhi abruptly clamped a curfew in the valley and cut down all means of communications on August 5, 2019 when it abrogated its own Constitutional Article 370 (clause 35-A). 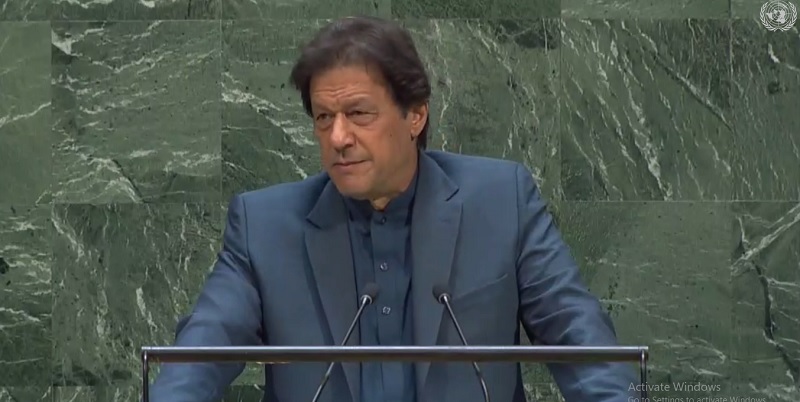 Starting his speech with the issue of Climate Change, he stated that action to mitigate Climate Change impacts need resources and funding. He stated that glaciers are melting in Pakistan and climate change is playing havoc with economies of poor Countries.


On second point of his speech, the prime minister said that billions are dollars are leaving poor countries and ended at rich countries through money laundering done by corrupt people but laws are not supporting poor Countries to reclaim their money back to home. He said that this situation is the same as terror financing and drug trafficking. He stated that his country faced this situation because money went out and plundered by ruling elites in the past. He stated that the world, World Bank and other financial institutions must act and help poor Countries to stop this malpractice.

While talking about Islamophobia, Imran Khan said that there is no radical Islam and Islamophobia presents a grave threat to international peace and security. He was of the view that noting the growing incidences of discrimination and violence based on religion and belief are harmful. He stated that after 9/11, Islam was portrayed as terrorism which was categorically wrong. He stated that marginalization of any community leads to radicalization and radicalization leads to destruction. He said that religion has nothing to do with terrorism. The prime minister cautioned against attempts to denigrate revered personalities and scriptures cloaked in the right to freedom of expression and opinion.

Talking about state established by Prophet Muhammad (PBUH), Prime Minister Imran Khan said that the State of Madina was a modern state that protected rights of every citizen including minorities. He added that Prophet Muhammad (PBUH) created a sense of compassion, humanity and justice in the State of Medina for all citizens residing in an Islamic State, and Prophet (PBUH) taught us how meritocracy, fair play, justice and equity would pave the wave for establishing a civilization built on compassion.

Imran Khan talked about radicalisation with historic perspective and stated that Jihad started in Afghanistan in 80s which glorified Jihad and the United States brought Pakistan as the host Country and Jihad was promoted in the entire society and then Jihadi were called by the United States and Western Countries as terrorists after 9/11. He stated that Pakistan lost over 70,000 innocent people by the hand of radicalization which was brought to Pakistan in 80s during the Afghan Jihad.

Talking about Indo-Pak relations, he stated that he tried his best to initiate talks with India because he (Imran Khan) believes in good neighborhood. However, response was India was negative.

Imran Khan stated that Pakistan does not want acceleration of tension with India and that was the reason that Pakistan handed back one Indian pilot to India who was shot down and captured in Pakistan. He stated that even after elections in India, Pakistan tried to normalise the bilateral relations but Pakistan came to know that India was conspiring to blacklist Pakistan in FATF.

Talking about the Kashmir issue, he stated that India abrogated the Article 370 and caged over eight million people in Indian Occupied Kashmir (IOK).

While giving background of the Indian Prime Minister Narendra Modi, he stated that he is a lifetime member of RSS which believes that India is only for Hindus, and Muslims and Christians and all other religions are inferiors in India. He stated that RSS is based on ideology of hate which murdered Mahatama Gandhi. He stated that RSS is training terrorists in camps and this has also been accepted by the Indian Home Minister. He was of the view that eight million caged people of Kashmir are not animals but they are human beings.

Imran Khan said that the people of Indian Occupied Jammu and Kashmir would never accept what they are facing and there would be a reaction once India would lift the curfew. He maintained that 11,000 women were raped in IOK, 13,000 young boys were abducted but there was no reaction from the world because India is a big market. He feared that there would be bloodbath once curfew is lifted because 900,000 Indian troops are in IOK. He stated that Kashmiris would react and there would be many Pulwama kind of incidents because Kashmiri youth would react due to what they are facing today. He stated that when such events would take place, India would blame Pakistan for terrorism and would tag such events as Islamic Terrorism.

The prime minister went on to say  that “are we children of a lessor God? why western world does not stand against atrocities being conducted by the Indian government in Kashmir”. He stated that Muslims in India would also react and can pick up the gun because they are facing purge and injustice.

Imran Khan cautioned that if two nuclear armed countries come eye to eye, the situation could lead to anywhere beyond imagination; therefore, he added, the United Nations has some responsibilities. He asked the world community to pressurize India to lift the curfew in IOK and fee the detained kashmir leaders, and also let the Kashmiris have their due right of self-determination.