The Consul General of Pakistan at Jeddah Khalid Majid and the Deputy Consul General Shaiq Ahmad Bhutto were present at the airport to see off the pilgrims.

On behalf of the government of Pakistan, the Ambassador Raja Ali Ejaz and the Consul General Khalid Majid conveyed sincere gratitude to the Custodian of the two Holy Mosques His Majesty Shah Salman bin Abdulaziz, His Royal Highness Crown Prince Muhammad bin Salman and the Saudi government for the hospitality and special treatment extended to these Pakistani Umrah Pilgrims. 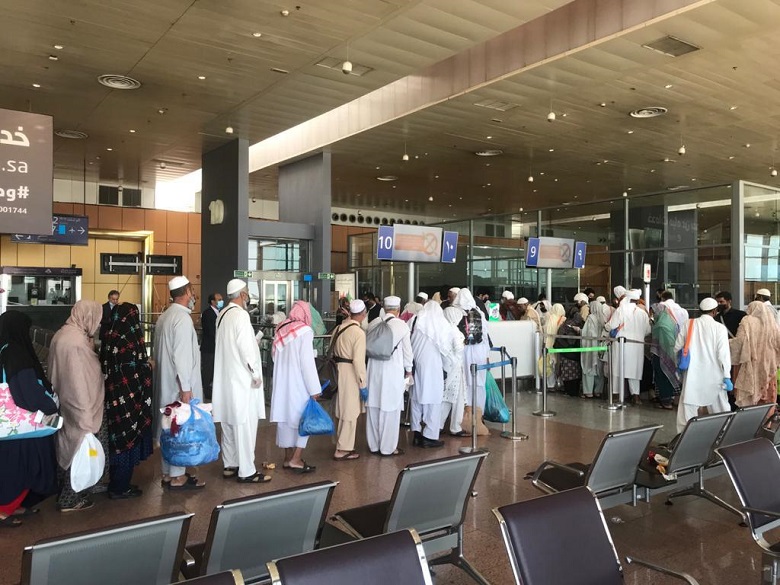 They particularly appreciated the Saudi Ministry of Hajj and Umrah for making suitable boarding, lodging and medical arrangements during their additional stay in the Kingdom.

They also appreciated the efforts made by the General Authority of Civil Aviation (GACA) and Saudia Airlines.

Around 474 Pakistani Umrah pilgrims were still left in Saudi Arabia due to the cancellation of international flights.

However, under special arrangements by the Saudi Ministry of Hajj & Umrah, two special Saudi Airlines flights have been arranged to take these leftover Umrah Zaireen to Pakistan.

This extraordinary care extended towards the Pakistani Umrah pilgrims is yet another symbol of strong brotherly relations between the two countries.