ISLAMABAD, Pakistan: The Prime Minister’s Special Assistant on Digital Pakistan Tania Aidrus has tendered her resignation from the post over the controversy surrounding her dual nationality.

Tania Aidrus herself broke the news on Twitter on Wednesday of her resignation, which according to her, has been sent to Prime Minister Imran Khan.

“Criticism levied towards the state as a consequence of my citizenship status is clouding the purpose of Digital Pakistan,” she wrote on Twitter.

“In the greater public interest, I have submitted my resignation from the Special Assistant to Prime Minister’s (SAPM) role. I will continue to serve my country and the prime minister’s vision to my best ability,” she further wrote. 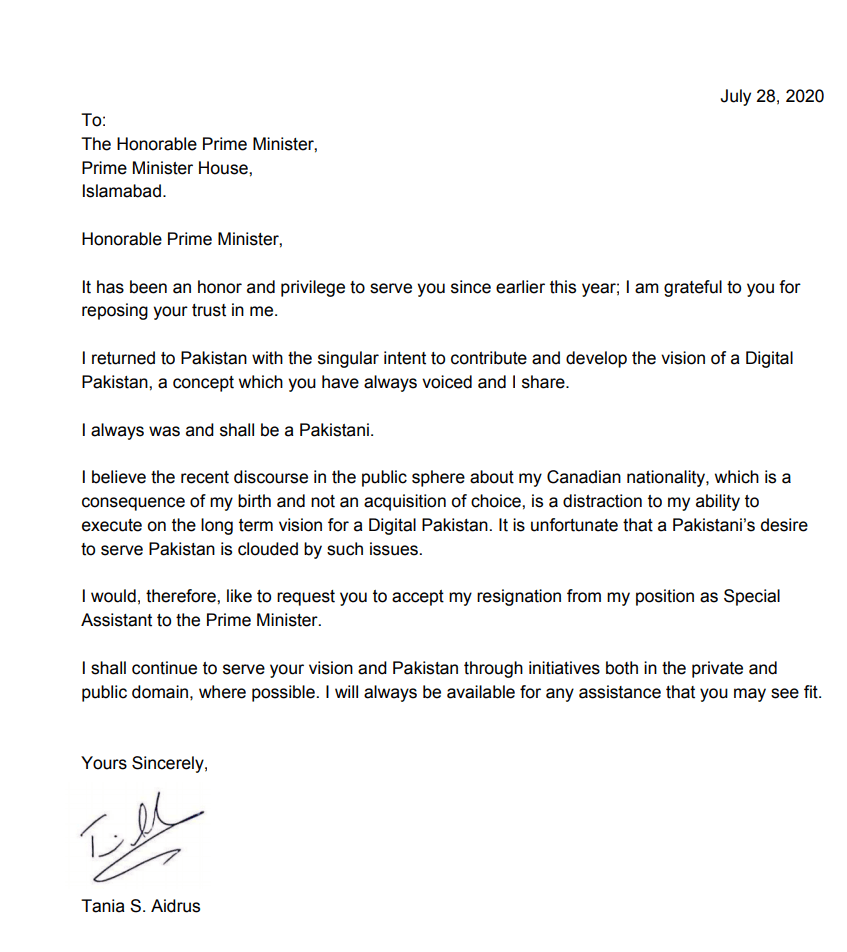 Prior to joining the team of Prime Minister Imran Khan to head the Digital Pakistan Campaign, Tania Aidrus was working as the Chief of Staff and Head of Strategic Initiatives on the Next Billion Users (NBU) team at Google.

Meanwhile, the Prime Minister’s Special Assistant for Health Dr. Zafar Mirza also resigned citing the criticism on the government as the reason.

<352> I have resigned as SAPM. I came to 🇵🇰 on a personal invitation of @ImranKhanPTI leaving WHO. I worked hard & honestly. It was a privilege to serve Pakistan. I am satisfied that I leave at a time when COVID-19 has declined in 🇵🇰 as a result of a grand national effort.

Due to ongoing negative discussion about the role of SAPMs & criticism on the gov, I choose to resign. Pakistani people deserve a better health care. I have worked sincerely to contribute to this cause. 🇵🇰 will Inshallah emerge out of COVID-19 with a stronger hlth care system.