Space for faith-followers is squeezing in Europe, Express Tribune

Monitoring Desk: Faith-followers in Europe are demanding equal rights and express their fears that space for faith-followers is squeezing in Europe although 72 percent of the total population of Europe comprises Christians (believers) while non-believers are just 20 percent.

These are observations of Prague-based writer Shazia Anwer Cheema who recently attended the Intercultural and Interfaith Dialogue under the title of “Building Trust Among Future Communities”. The Dialogue was organized by the Institute of International Relations Prague (IIR) in collaboration with the Ministry of Foreign Affairs of the Czech Republic, and Anna Lindh Foundation and Organization of Islamic Cooperation.

Hereunder is her original Opinion “Why should believers be citizens sans rights?” published by Express Tribune on Wednesday. 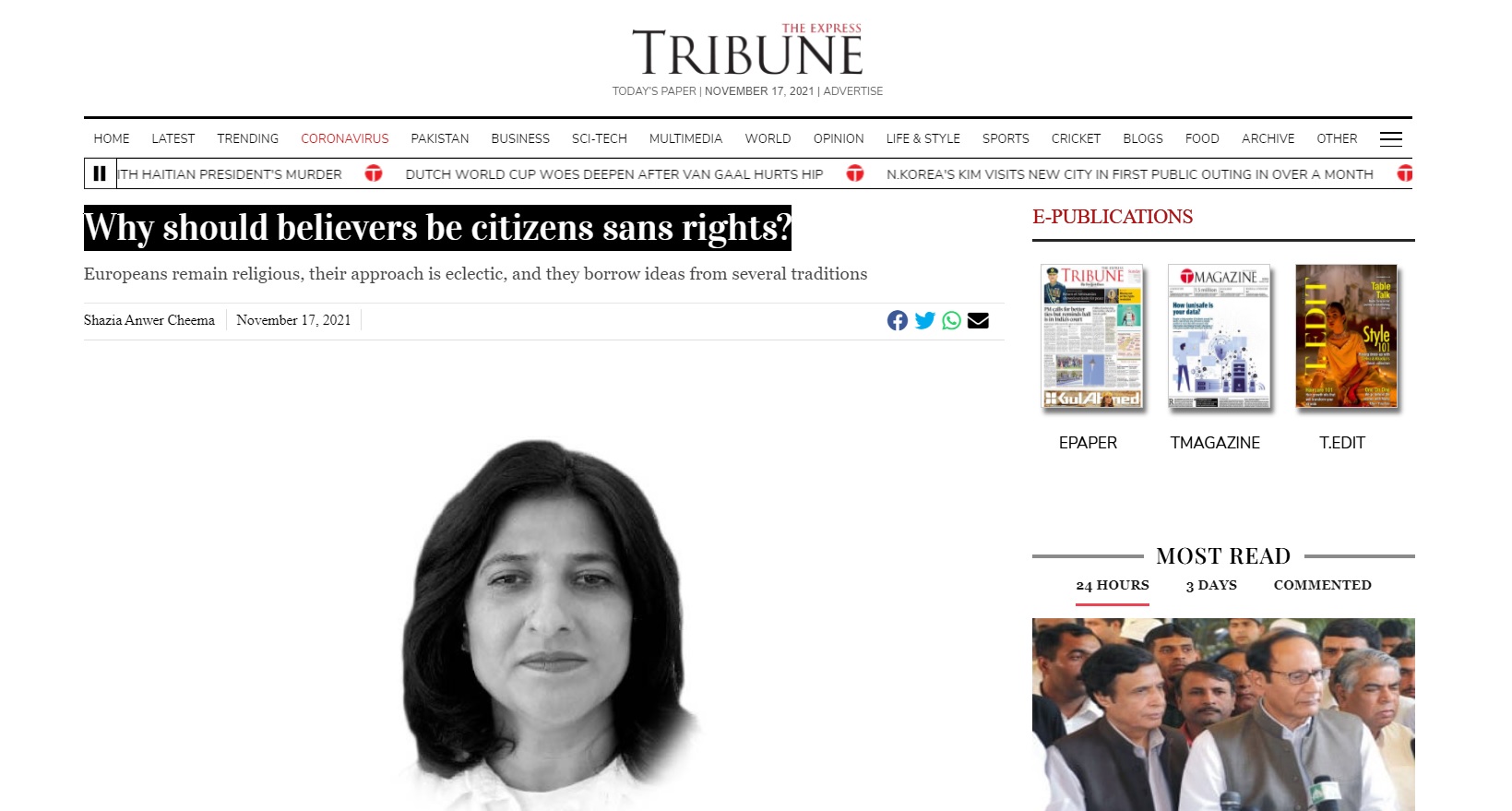 “If being a “Secular” is an identity of someone and this is protected under international treaties and norms then why the identity of being a “Religious” should not be protected?”

Such thought-provoking and philosophical questions were part of a discussion that I attended in Prague on November 11, 2021. The Intercultural and Interfaith Dialogue under the title of “Building Trust Among Future Communities” was organized by the Institute of International Relations Prague (IIR) in collaboration with the Ministry of Foreign Affairs of the Czech Republic, and Anna Lindh Foundation and Organization of Islamic Cooperation.

Addressed by over 35 plus eminent politicians, international scholars, academicians, policymakers and members of European Parliament, members of civil society, and faith-based organizations from Europe and the United States, the Dialogue deliberated the use of interreligious interaction as a policy tool for building trust within diplomatic negotiations, in state-society relations, as well as among different cultures.

The Dialogue brought perspectives from interpretations of different religions (Islam, Christianity, Judaism) because followers of all three Abrahamic religions are facing an identity crisis in Europe that has a face of a Secular Society but European Secularism is marginalizing faith-followers.

Though recommendations of the Dialogue and pointers of speeches are spared over thousands of words, the most sensitive and important point was that faith-followers expressed their fears that space for faith-followers is squeezing in Europe although 72 percent of the total population of Europe comprises of Christians (believers) while non-believers are just 20 percent.

According to the European Values Study, the European population is comprised of 20 percent non-believers, 72 percent Christians, and over six percent Muslims.

We all consider and believe that Europe is Secular land. Yes, it is without any doubt but if someone thinks that Europe is a secularized continent where people do not go to places of worship anymore, is an ill-perception.

If someone considers that Europeans do not believe in God anymore, and they do not seem to be religious at all, then let me add these assumptions are not true.

According to “The European Values Study”, half of all the Europeans pray or meditate at least once a week. Three out of four Europeans say they are religious persons. Of course, there is a big gap between the more secularized north-western European countries and the more traditional south-eastern ones. However, even in a country like Holland, famous for its liberal tradition, one in four of all the inhabitants attend church. Nevertheless, one assumption is true: most European churches attract fewer believers every year. Especially in the western part of the continent, the old religious institutions are deteriorating, showing analyses of the European Values Studies.

Research says that people who consider themselves atheists are a small minority, except in France, where almost 15 percent say they are atheists.

“It is obvious that a vast majority of all the Europeans nominate themselves as religious persons. There are even more people who consider themselves as religious as there are people who attend church. It is a kind of ‘believing without belonging’. People pick and choose religious beliefs, doctrines, and practices and they are mixing and match them, as they would select food in a cafeteria. Sociologists talk about this trend as a ‘cafeteria religion’, or as ‘church-free spirituality’. Europeans remain religious, their approach is eclectic, and they borrow ideas from several traditions. Meanwhile, many institutionalized churches, especially in the West, are running empty,” claimed the Research.

It is pertinent to mention that the “European Values Study” is a large-scale, cross-national, and longitudinal survey research program on basic human values. It provides insights into the ideas, beliefs, preferences, attitudes, values, and opinions of citizens all over Europe. It is a unique research project on how Europeans think about life, family, work, religion, politics, and society. Therefore, this research is scientifically based and unbiased.

Data available testifies that faith-believers are in majority they are rightfully asking the society that why should they (believers) be treated as Citizens Without Rights when they all non-believers to live as they wish to live?

Note: Shazia Anwer Cheema is a Ph.D. scholar of Semiotics and Philosophy of Communication at Charles University Prague. She can be reached at shaziaanwer@yahoo.com and tweets @ShaziaAnwerCh