“Sir Syed’s vision of Modern Education is yet a pipe dream in today’s Pakistan”: CSJ Conference

LAHORE, Pakistan: A “Sir Syed Ta’aleem Conference” was organized under the aegis of the Centre for Social Justice (CSJ) and Mir Khalil Ur Rehman Memorial Society (MKRMS) in Lahore on Saturday.

The day-long deliberations on Sir Syed Ahmed Khan’s contribution for the cause of educational enlightenment among the Muslims of the Indian subcontinent found a conspicuous relevance in the current educational context of Pakistan. 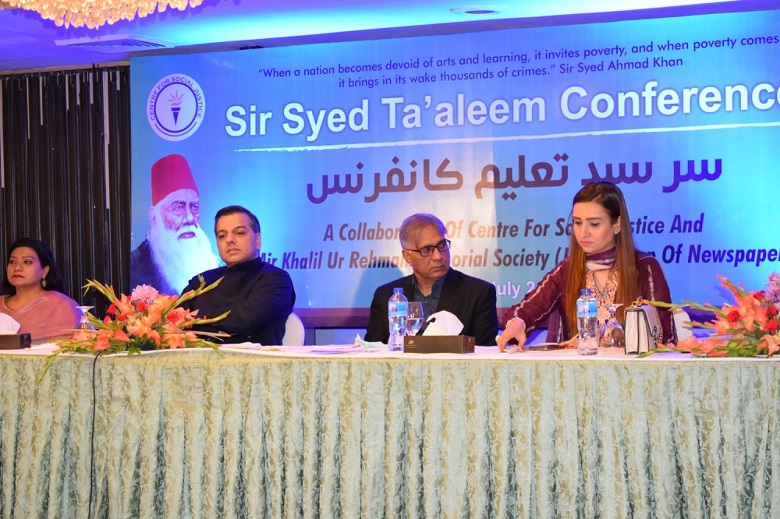 Guest of Honor, Syed Masood Ahmed, the great-grandson of Sir Syed while addressing the audience said that Sir Syed was born in Delhi in 1817, to a socially prominent and intellectually distinguished family which had considerable influence in the Court of Bahadur Shah Zafar, the last Mughal Emperor.

The political context of a new colonization of a proud civilization was facing an existential crisis that impacted the Muslims of the subcontinent in particular. Hence, Sir Syed’s ideas and thoughts are a role model for us, he taught us to fight in tough times and to sustain our presence without compromising on our dignity and honor. Sir Syed Ahmad khan was an institution and movement himself.

In the keynote speech, Dr. Syed Jaffar Ahmed, a Historian, and academic observed that Sir Syed capitalized insights of a historian into social dynamics; a remarkable activist with quality of leadership, a democratic spirit, and an altruist who worked tirelessly for social reforms, moral rejuvenation, and public welfare cutting across the barriers of caste, color, and creed.

Dr. A.H Nayyar an Educationist and Policy Expert traced the history of education in Muslims of South Asia and the role of Sir Syed in it. In particular, he focused on the efforts made by early reformers in introducing modern education, and on the historic competition between traditional Islamic education and modern secular education, and explored the reasons why it continues to echo even now. He recommended a re-reading of Sir Syed in order to improve the education policies to contemporary Pakistan.

Intellectual and writer Dr Arfa Sayeda Zehra underlined the contributions of Sir Syed for empowering the marginalized. She stated that there is no denial to this fact that Sir Syed was a reformist and progressive thinker of his times. He was the firm believer of multiculturalism, where all communities irrespective of distinctions must be allowed equal status under the state.

She pointed out that Sir Syed extricated the common people from the meshes of medievalism and out-moded patterns of thoughts and behaviour.

“He was a secular, nationalist and a founder of Hindu-Muslim unity who dedicated his whole life for the upliftment, empowerment, and endorsement of the entire Indian society especially the Muslim community” she added.

Historian and writer Dr. Yaaqob khan Bangash invited a reflection on Sir Syed’s vision of inclusion through modern education. He stated that Sir Syed realized the importance of modern education and he believed that it was the education alone that would help achieve the much-needed cherished goals of development, peace, harmony, and political stability for the masses. He stood for reformation and transformation of society on modern lines. What Sir Syed wrote about society and human culture 150 years ago continues to be relevant. In fact, the thinking of Sir Syed on many critical issues can still provide us some significant insights to overcome from the challenges we are in because Syed was a firm believer of dialogue and discussion even on the matters of religion.

The Dean Education Department of Agha Khan University, Dr. Farid Panjwani introduced the audience with the ideology of Sir Syed and Fazlur Rahman as two modernist reformers from South Asia. He stated that Dr. Fazlur Rehman was skillful at developing an innovative lens to comprehend the classic traditional heritage of Islam. He conceptualized tradition as a dynamic source of energy that should fuel the resurgence of innovative reasoning in Islamic scholasticism. Similarly, Sir Syed absorbed the knowledge of the 19th century and passed it on to the 20th century in vernacular mediums. He praised the scientific advancement of the West and urged the Muslims to gain modern education in order to prosper

Prof Jacqoline, Assistant professor of English at Forman Christian College University, Lahore spoke on the vision of Sir Syed. She opined that Syed promoted education as a mean to countering biases and uplifting the marginalized. She stated that Sir Syed perceived the immeasurable potential of education as an effective instrument of social change and reconstruction at the very outset. He founded institutions which became a beacon of knowledge for the generations to come.

“The teachings of Sir Syed will always be relevant as he opposed ignorance, superstitions and evil customs and he firmly believed that the society will not progress without the acquisition of modern scientific education” she added.

Mr. Peter Jacob (Executive Director, CSJ) concluded the session by saying “it is here that Sir Syed, the pioneer of Aligarh Movement, is needed to re-evaluate once again. His mission of scientific education about society needs special attention to overcome the present-day challenges. In the context of the current wave of aggressive nationalism, which has already consumed many lives due to the increasing incidents of hate crimes, an honest effort should be made to understand the vision of Sir Syed.

He urged that the focus of our academics, scholars, thinkers, writers, civil society, and even political class should be to revive the idea of an egalitarian society. We can end the religious intolerance and backwardness by understanding the blurred contours of history and contextualize Sir Syed’s vision of a forward-looking society.

In a special message from India, the great-granddaughter of Sir Syed, Scheherzade Masood, sent a felicitation note for the conference stating that  “I am proud to say I am a direct descendent of the Late Great Sir Syed Ahmed Khan.  Having lived in Aftab Manzil, Fort Road, Aligarh, named after my maternal great grandfather, Aftab Ahmed Khan, who held the position of Vice-Chancellor at the Aligarh Muslim University (AMU), I taught Legal Jurisprudence at the Law Department of the AMU on my return from abroad where I worked as a Corporate Lawyer in the UK and Dubai for over 20 years. It gives me great pleasure on behalf of myself and all the 30,000 Students of the AMU to convey our very best wishes for the success of the Sir Syed Taleem Conference in Lahore.”

Mr. Wasif Nagi (Senior editor MKRMS) moderated the sessions of the conference and emphasized that Sir Syed’s vision has survived two centuries because his thoughts carried within them a potential to foster a modern Muslim identity in India. His idea to reinterpret Islamic beliefs with scientific and rational values and disseminate them to the younger generation is particularly relevant today.