The time difference between the beginning of the First and Second World Wars is only 25 years, and how much time has passed from the end of the Second World War to the present day? Only 75 years old.

In May, so many years have passed since the day of victory over fascism. I wonder why, for such a long period of time, the Third World War did not happen. The answer is simple: nuclear weapons.

It was after 1945 – the end of World War II that the major countries of the world conducted the first tests of nuclear weapons. The only country to use a nuclear bomb during World War II is the United States.

After Russia, China, France, Great Britain, India and Pakistan acquired their own nuclear weapons, the international balance of forces changed dramatically but not in favor of the United States.


After World War II, the Americans mobilized all their resources in order to destroy Communism, and in 1991, with the collapse of the USSR, they finally achieved their goal.

After the collapse of the Soviet Union, a unipolar world was established, and while the West was in hibernation, China grew rapidly from both an economic as well as in a technological point of view.

Why did the West miss the opportunity to anticipate China’s growth? What factors influenced this?

The first factor is the Cold War. The second factor is the war unleashed by Bush on international terrorism in Iraq, Afghanistan and elsewhere in the Middle East over the events of September 11, 2001 in the United States. These two main factors clouded the gaze of the West.

And only in 2016, when Donald Trump came to power, the United States launched an open ideological, political and media confrontation with China. Sometimes there is pressure on Huawei, sometimes it is the trade war and now allegations of deliberately hiding COVİD-19.

A sanctions bill against China called “Responsibility for COVID-19 and the anti-Chinese human rights act in Xinjiang are some pointers on the list of West trying to twist the arms of China.

However, the Americans seemed to use their own resources to restrain China’s growth, so they decided to enlist the support of the countries of their allies and partners, thereby mobilizing their ideological and information resources in the fight against China. These are multibillion claims of the US allies against China, allegedly because of the “spread of coronavirus,” as well as widespread propaganda about the dangers of 5G technology for human health in the UK and other countries. How it all ends, of course, is hard to imagine. But one thing is clear: Western pressure on China is growing exponentially, anti-Chinese rhetoric continues to tighten, which has not been observed since 1972, after Nixon’s visit to China.

Unfortunately, in the modern world, even in a world with the presence of nuclear weapons, which serves as a panacea for all ills, first of all, for war, the law of the jungle prevails. The strong destroy the weak or turn them into self-dependent formations that do not raise their voices without the overlord’s command.

It should be emphasized that China is a peaceful state and has never attacked anyone. Throughout its history, the Chinese people have only defended themselves. And today, nothing has changed.

China is not going to fight, it has no plans for the territories of its neighbors, it wants only one thing – to develop quietly in the interests of its own and in the interests of the whole world. The hegemony of the United States and the dollar is very expensive for the global economy, while the expansion of China’s economic activity, on the contrary, provides new opportunities.

The United States every hour makes it clear that they do not intend to tolerate the strengthening of the PRC and they do not need such a competitor. Aware of the advantages of China, Washington is waging a war with Beijing, which, against the backdrop of the pandemic and the global crisis, has become open. This raises the question: should China increase the number of nuclear warheads?

Given the power law prevailing in world politics, China was forced to start developing nuclear weapons in the early 60s and became the fourth nuclear power in the world.

For decades, Americans have been keenly interested in the question – how many nuclear warheads do the Chinese have.

In 2011, China published the White Paper of the Ministry of Defense, which confirmed that the PRC pursues a policy of maintaining nuclear capabilities at the minimum necessary level and not using nuclear weapons first. Due to the fact that China is not involved in arms control treaties, US intelligence is trying to figure out the exact characteristics of Chinese nuclear capabilities. The fact that the Chinese side will not hit first is not enough for Washington; it wants to know what kind of answer it is worth counting on if pressure on Beijing crosses all permissible boundaries. Doubts make China’s opponents keep their distance.

But how realistic is the use of US military force? Not excluding such an option, in principle, we can still state that this would be insane because China is not Iraq or Syria. It will be very difficult for the US to get international approval for aggression, create a coalition, and make the world consider Americans to be saviors. And most importantly, the Chinese have nuclear weapons.

Knowing the nature of the enemy, it is worth being prepared for any development of events. Beijing needs to further strengthen its position. This is an objective necessity. Not for war. And so that the enemy continued to keep his distance.

For its part, over the past couple of years, China has taken many steps towards the United States, including unilateral ones, reducing duties on American products.

In January of this year, US President Donald Trump and Vice Premier of the State Council of the PRC Liu He signed a partial trade agreement, which was regarded as a sign of reconciliation. Unfortunately, this did not last long, because the Americans were not ready for it. 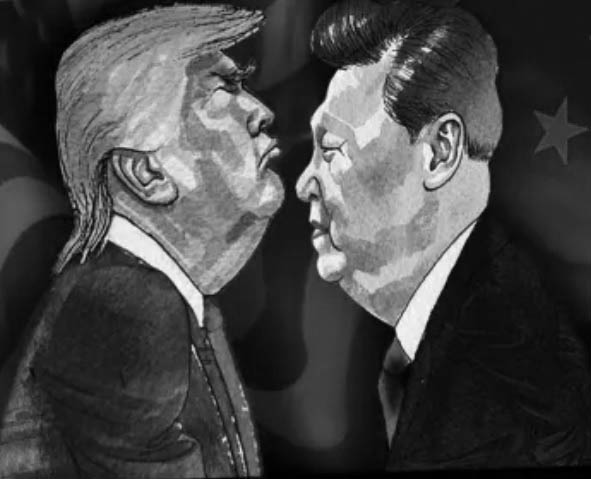 Economic pressure on China has not and will not produce results – the Americans were able to verify this even before the pandemic. The current financial and other threats may turn against America itself. So, China can start selling US securities (which it has 1.1 trillion) and collapse the dollar. So Beijing also has strong weapons against US threats.

China has enormous intellectual, scientific and human potential. The innate industriousness of the Chinese people pushes this country forward along the path of progress. Washington wants it or not, but the PRC factor in the world will intensify, and it is better for the two world powers to be friends and trade for the benefit of all. And it makes no sense to threaten and make plans against China – he will always have something to answer with.