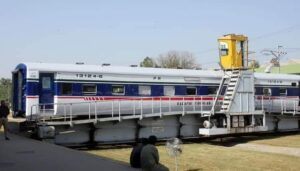 While addressing the Inauguration Ceremony, Sheikh Rasheed Ahmed said that all the credit to operationalize the KCR goes to the government of Prime Minister Imran Khan.

Sheikh Rasheed announced that the fare of KCR will be Rs 30 per route and in the first phase four trains will be operated daily from Pipri to City Station Karachi. He further said that a traveling pass for the KCR will be collected only Rs 750.

The railways minister said that the KCR will be extended to other parts of the City and work is in progress.

The minister said that the amount of Rs 1.8 billion has been earmarked for the KCR and so far Rs 17 million have been spent. He added that each coach of the KCR has been ready at a cost of Rs 0.9 million.

The minister for railways said that the encroachment at Pakistan Railway land will be removed from land mafia.

Mati
Mati-Ullah is the Online Editor For DND. He is the real man to handle the team around the Country and get news from them and provide to you instantly.
Share
Facebook
Twitter
Pinterest
WhatsApp
Previous articleTCL Pakistan opens its first flagship store in Karachi
Next articleHania Amir Shares Her Adorable Click From Childhood Memories!