Shaukat Tarin rules out possibility of coming out of IMF program

ISLAMABAD, Pakistan: The Federal Minister for Finance and Revenue Shaukat Tarin has said that our negotiations are continuing with the International Monetary Fund (IMF) and ruled out the possibility of coming out of its program.

While addressing a News Conference along with some members of the Federal Cabinet and Economic Advisory Council in Islamabad on Friday, Shaukat Tarin said that he will also visit Washington in October 2021 for one-on-one talks with the international lender.

The finance minister said that the government has chalked out a comprehensive plan to achieve an inclusive and sustainable growth. He said that a mechanism has also been developed to ensure the implementation of the plan to achieve the targets set for different sectors.

The minister said that Prime Minister Imran Khan will regularly be briefed about the implementation of the plan and the people will also be kept informed about the progress on it. 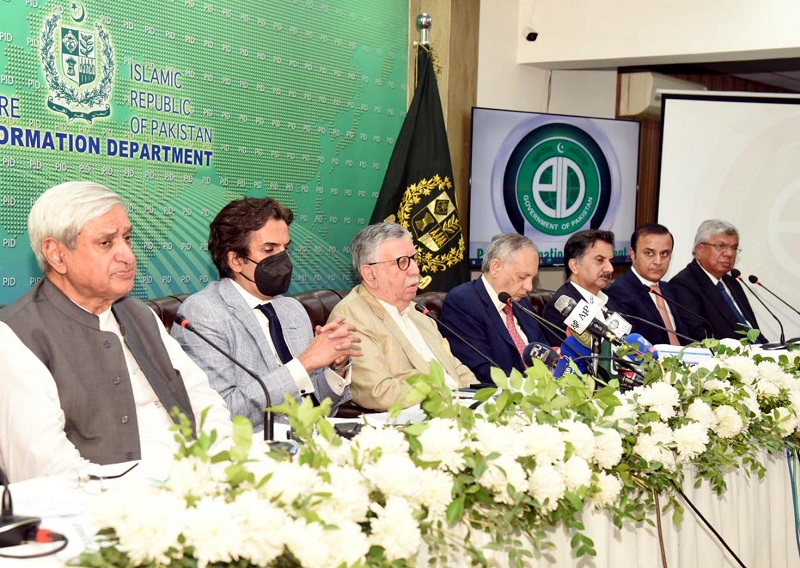 The Minister for National Food Security Syed Fakhar Imam said that new initiatives are being launched to strengthen the agriculture sector. He said that the Country witnessed a significant increase in major crops.

Fakhar Imam said that our focus is now on improving the cotton production by providing quality seeds and other inputs to the farmers at reduced rates.

The minister said that the research institutes will be upgraded to achieve high productivity in the agriculture sector. He said that the government is giving special emphasis to improve the living standards of the farmers.

The Minister for Industries and Production Khusro Bakhtiar said that the government is focusing on Made in Pakistan.

Khusro Bakhtiar said that the government’s policies have started yielding results. He said that there has been 15 percent growth in Large Scale Manufacturing, and added that we are giving tax incentives to the Small and Medium Enterprises (SMEs) and hurdles are being removed to provide them the credit.

The minister said that the government now plans indigenization of raw material in order to strengthen its industrial base. He said that an industrial zone is being established on 1,500 acres of land in Karachi and export-oriented industries will be encouraged to make investments in it.

The Prime Minister’s Adviser on Commerce Abdul Razak Dawood said that the government’s target is to bolster exports. He said that exports targets are being achieved, adding that we want to rationalize our imports by encouraging local production.

The adviser said that we have done the tariff rationalization and 50 percent of raw material being imported is duty-free. He said that this facility will be further expanded in the next budget.

In his remarks, Dr. Ishrat Hussain emphasized the need for empowering the local bodies in order to provide basic amenities of the people at their doorsteps. He said that a plan has been prepared to revamp the state-owned enterprises.