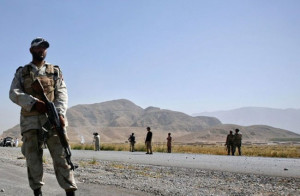 In a statement on Tuesday, the ISPR said that an FC vehicle returning to the base camp after the routine patrolling duty was struck by an improvised explosive device (IED) in Pir Ghaib of Balochistan’s Mach town late last night.

The ISPR said that the attack resulted in the martyrdom of six soldiers including a Junior Commissioned Officer (JCO) and a civilian driver.

In another incident, Sepoy Imdad Ali embraced Shahadat during an exchange of fire with terrorists near Mand area of Kech district in Balochistan.

Mati
Mati-Ullah is the Online Editor For DND. He is the real man to handle the team around the Country and get news from them and provide to you instantly.
Share
Facebook
Twitter
Pinterest
WhatsApp
Previous articleTECNO’s “Double Your Happiness” Online Lucky Draw is Going LIVE Soon
Next articleCOVID-19 Cases in Pakistan soar to 48,091