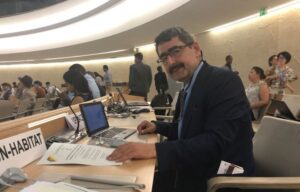 We need to define the legal situation. Today, the Armenian Foreign Ministry uses the wording as the resettlement of Armenians in the occupied territories of the Republic of Azerbaijan, this definition in fact aims to legitimize an illegal action under international law.

We cannot simply define the situation as the expulsion of the native Azerbaijani populations` from these territories and their homes to be inhabited by ethnic Armenians from abroad, including from the Middle East is a gross violation of international humanitarian law, primarily the Article 6 of the Geneva Convention IV relative to the protection of Civilian Persons in Time of War. When the wording resettlement is used, the aim is to define the new comers to settle in the territories of Azerbaijan illegally as migrants or refugees. We first need to know that the settlers implemented by Armenia in the occupied territories of the Republic of Azerbaijan, are neither under the definition of migrant nor refugee accordingly to the UN legal system.

Under the doctrine lex specialis derogat lex generalis, if two laws govern the same factual situation, a law governing a specific subject matter (lex specialis) overrides a law governing only general matters (lex generalis). Victim based approach is an obligation under the UN legal system to protect the lives and the rights of the victims that constitutes the lex specialis. And here, the victims are the expelled native population of Azerbaijan. The native population of Azerbaijan are replaced by Armenia with the new comer ethnic Armenians in the occupied territories which can never be defined as resettlement of Armenians in any part of the occupied territories of Azerbaijan,. Armenia brings ethnic Armenians to settle and there exits a settler colonialism policy of the 19th century by the implantation of settlers from Armenia and abroad by as of today. The aim of Settler colonialism is to destroy to replace which is now being done by Armenia. Settler colonialism is simply a form of ethnic cleansing policy.  Ethnic cleansing is similar to forced population transfer, but involves an additional element of the use of “terror-inspiring violence” which was made in the past by Armenia to depopulate the territory.

The International Covenant on Civil and Political Rights, and the Universal Declaration of Human Rights have also declared such actions to be illegal. According to the International Law Commission, any internationally wrongful act which is not an international crime in accordance is an international delict. The UN Committee on the Elimination of Racial Discrimination, in a 1995 opinion relating to Bosnia-Herzegovina: “any attempt to change or uphold a changed demographic composition of an area, against the will of the original inhabitants, by whichever means, is a violation of international law. By recognizing the criminal unlawfulness of the acts of Armenia, there exits the legal ground for recognizing that settler colonialism policy is a criminal act justifying the creation of ethnic cleansing of the native Azerbaijan population. Under the International Criminal Tribunal for the Former Yugoslavia and the International Criminal Tribunal for Rwanda Statutes, deportations of populations and groups were prosecuted as crimes against humanity. By the Statues of the two international tribunals, perpetrators of ethnic cleansing asked to be brought to justice.

Also we need to define the legal status of the settler colonialist ethnic Armenians living abroad in the territories of Azerbaijan. Their existence in the territories of Azerbaijan is not only illegal but as well against the right to self-determination of the deported native population of Azerbaijan. The right to self-determination here constitutes a jus cogens norm and under the protection of the UN legal system. Illegal acts cannot create legal rights. Any settler colonialist Armenian if ever participates in Armenian Army in the territories Azerbaijan, the status of the settler colonialist will be under the definition of mercenary and will not be protected by the international humanitarian law as their existence is as a foreign fighter. A US government communication from the Pentagon following the creation of KFOR in Kosovo in 1999 alleged that “volunteer forces” of Russian army participated in Serbian ethnic cleansing against Albanians, motivated by personal association with the Serb ideological cause, rather than by Russian government sanction. Ideological mercenaries, however, may also in part be motivated by the financial rewards of being a combatant, at least in terms of it representing a livelihood. The settler colonialists here chose to come to an armed conflict zone voluntary with the economic benefits given to them by Armenia. Any arm usage by the settler colonialist for economic benefit is under not only definition of foreign fighter but as well mercenary. The settler colony policy of Armenia here is an international wrongful act accordingly to the UN General Assembly resolution on “the Use of Mercenaries as a Means of Violating Human Rights and Impeding the Exercise of the Right of Peoples to Self-Determination” that defines the use of mercenaries and their recruitment, financing, protection and training are causes for grave concern to all States and that they violate the purposes and principles enshrined in the Charter of the United Nations.

The above article was originally published by Eurasia Diary, and is written by the Turkish Professor Mehmet Sukru Guzel, the founder President of the Center for Peace and Reconciliation Studies.