LAHORE, Pakistan: Speakers at Seminar of Nazriya Pakistan Trust (NPT) said that ‘the nation must honour its heroes’ while remembering the role, contributions and services in the freedom movement of student leader, Colonel Amjad Hussain Sayed, on the occasion of his birthday centennial.

The Seminar, held at the Nazriya Pakistan Trust (NPT) which is dedicated to promoting the vision and ideology of the Quaid e Azam, was chaired by the NPT Chairman of Chief Justice (retired) Ejaz Nisar and had a keynote speech by NPT Senior Vice-Chairman Mian Altaf Farooq.

A diverse and distinguished audience of 200 persons also complimented Senator Mushahid Hussain on his election as the Vice Chairman of Nazriya Pakistan Trust. 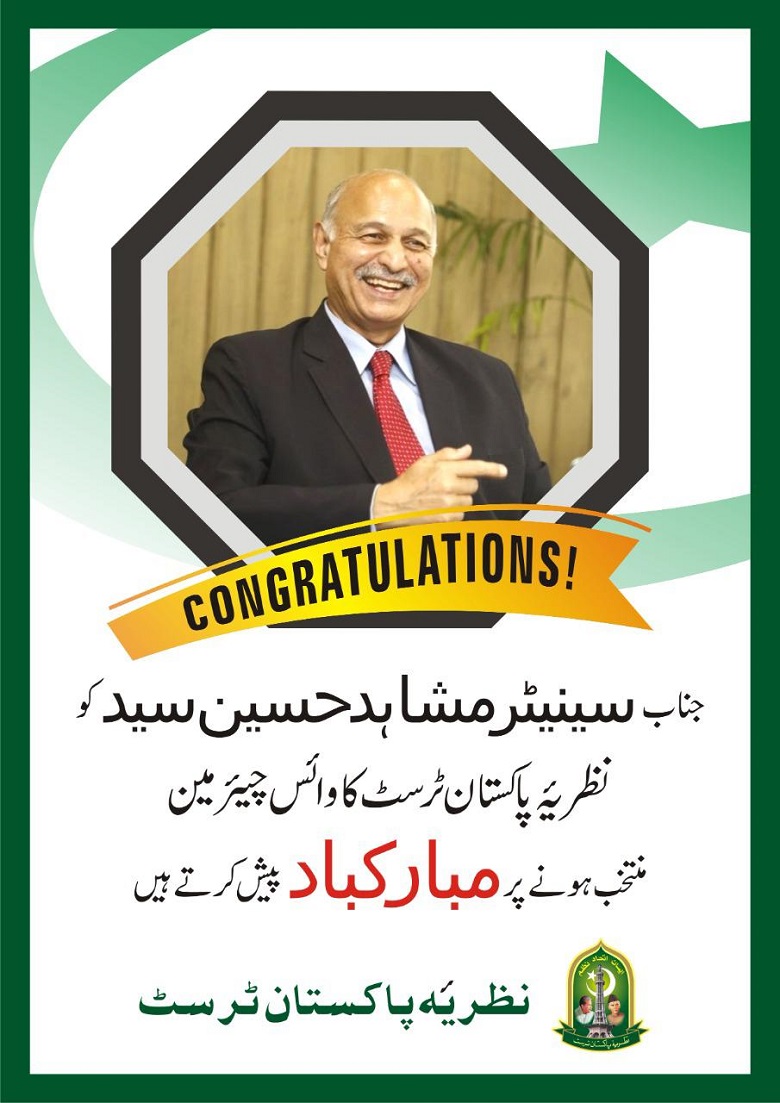 Ms Tahseen Sayed, daughter of Colonel Amjad Hussain, who recently retired as the senior most Pakistani in the World Bank, spoke of her father’s strong commitment to female education and inculcating values of ‘Rizq e Halal’ & ‘Kalima e Haq’.

Chaudhry Javed Ellahi termed him as an extraordinary example of Pakistani nationalism.

Chief Justice (retd) Ejaz Nisar termed Col Amjad Hussain as a ‘loyal foot soldier of Allama Iqbal and Quaid e Azam’ at whose behest he attended the 2 historic sessions of the All-India Muslim League, Lucknow 1937 and Lahore 1940, while Mian Farooq Altaf urged ‘the nation must never forget its heroes’.

Senator Mushahid Hussain thanked the Board of Governors and General Council of NPT for reposing confidence in him through his unanimous election as Vice Chairman of Nazriya Pakistan Trust.

Senator Mushahid Hussain termed it as ‘a unique national non-governmental organisation dedicated to the promotion of the vision of the Founding Fathers of Pakistan, especially Allama Iqbal and Quaid e Azam, as well as Madar e Millat Mohtrama Fatima Jinnah’.

Later, while speaking to the media, Senator Mushahid Hussain urged the need for a ‘political ceasefire’ on such pressing national issues as economy, energy, environment, extremism and education’, adding ‘no one person, party, government or institution alone can solve the problems of Pakistan’.

Mushahid Hussain said the political forces in Pakistan had demonstrated maturity by ensuring a smooth military transition and there was no reason why General elections in 2023 should also be fair, free and transparent leading to a smooth political transition.