ISLAMABAD, Pakistan: The Centre for Eurasia and Central Asia Studies-Institute of Peace and Diplomatic Studies and Riphah Institute of Public Policy, Riphah International University organized a Seminar on “Nizami Ganjavi: A Revolutionary, Visionary Poet and Philosopher” on December 14.

The speakers at the Seminar highlighted that Nizami Ganjavi is a poet of peace, tolerance, love, and humanity, and as the national poet of Azerbaijan, he has played a significant role in promoting the human values and cultural ethos of Countries across the world.

They said that Nizami Ganjavi is the poet of all humanity.

The speakers highlighted that Nizami Ganjavi has influenced many poets in the years and ages to come, and that his creative ideas are immortal and are a common heritage of all humans.

Farhat Asif, Founder of the President Institute of Peace and Diplomatic Studies in her remarks said that this Seminar was arranged to commemorate the 880th anniversary of the birth of Nizami Ganjavi along with celebrating the “Year of Nizami Ganjavi” as declared by the Azerbaijani government. 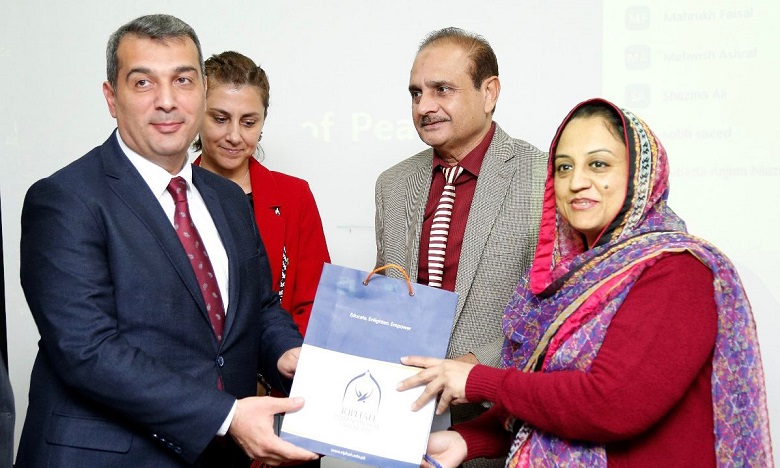 Dr. Rashid Aftab, Director, Riphah Institute of Public Policy, while sharing his welcome remarks, highlighted the importance of learning and inspiration from the life and letters of Nizami Ganjavi.

Ambassador further highlighted that Nizami’s work has become an integral part of the spirituality of our people for over eight centuries.  The whole life and rich literary activity of the great poet are connected with Ganja, the capital of the Azerbaijani Atabey’s state, which was known not only as of the largest city of Azerbaijan and the Caucasus.

Ambassador of Azerbaijan to Pakistan further said that Nizami Ganjavi enriched Eastern artistic thinking with scientific and philosophical thoughts and raised his poetry to unprecedented heights with his universal and miraculous poetic power.

The ambassador further added that the famous “Khamsa” of the poet-thinker stands at the peak of the search for spiritual riches of human race and occupies a worthy place among the masterpieces of world literature.

Ambassador of Azerbaijan further noted that the great poet of Pakistan, Allama Muhammad Iqbal’s works is also been studied in Azerbaijan for many years. This year The Institute of Literature named after Nizami Ganjavi of ANAS and the Writers’ Union of Azerbaijan have published “selected works” of the prominent Pakistani poet Mohammad Iqbal.

And also this year, at the initiative of the World Turkic Academy, Iqbal’s book “Reconstruction of Islamic thought” was translated into Azerbaijani language and published.

Prof. Dr. Eynulla Madatli, Executive Director, Institute of Philosophy and Sociology, Azerbaijan National Academy of Sciences, who has also remained as Ambassador of Azerbaijan to Pakistan, has shared his wisdom and insight on Nizami Ganjavi.

In his speech entitled “Attitudes to Nizami Ganjavi heritage; in Iran: claims and truths” Dr. Eynullah shared the various references and explained the fact that how Nizami’s heritage belongs to Azerbaijan.

Dr. Ijlal Hussain, Director, Silk Road Centre, Islamabad, talked on the topic of the diversity of Pakistan and Central Asia, South Asia, silk road region. He has also talked at length about the way Nizami depicts women in his poetry.

Abdul Basit Mujahid, Assistant Professor, Deptarment of History, Allama Iqbal Open University, Islamabad said that unique aspects of his poetry were a deep expression of his poetry, understanding of romance, and inter-state realities. He also mentioned that Nizami played a role in Urdu.

A large number of students, faculty members, media representatives were present there at the Seminar.