FeaturedGovernment of Pakistan
By Mati
January 6, 2021

ISLAMABAD, Pakistan: The Ambassador of the Kingdom of Saudi Arabia to Pakistan Nawaf bin Saeed Ahmed Al-Malki held a meeting with the Federal Minister for Energy Omar Ayub Khan in Islamabad on Wednesday.

The Prime Minister’s Special Assistant on Petroleum Nadeem Babar was also present in the meeting.

In the meeting, both sides deliberated upon joint ventures by Pakistan and the Kingdom in the Petroleum & Energy Sector. 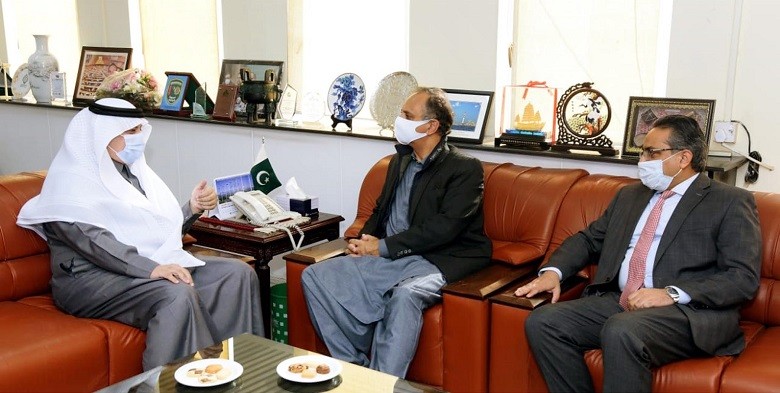 The minister apprised the envoy about the progress of various energy projects in lieu of investment-friendly policies introduced by the current government in diverse fields for the thriving economic development of Pakistan.

Omar Ayub said that the diversified market of the Energy Sector is one of the prime investment destinations to boost the economic growth of the Country.

The federal minister also told the envoy that the government is focusing on energy projects under a new renewable energy policy to harness local resources for power generation and the revival of exploration and production activities in the Oil & Gas Sector would attract investment in the Country.

The ambassador acknowledged the efforts made by the minister & his team for Pak-Saudi projects in the Energy Sector.

Nawaf bin Saeed Ahmed Al-Malki stressed that the kingdom would continue to work with Pakistan for strengthening bilateral relations between the two brotherly Countries.

Mati
Mati-Ullah is the Online Editor For DND. He is the real man to handle the team around the Country and get news from them and provide to you instantly.
Share
Facebook
Twitter
Pinterest
WhatsApp
Previous article
India’s impunity on Kashmir’s freedom must stop, UN must intervene: MAPIM
Next article
Pakistan to operate two flights per week to Saudi Abha City: Minister
Share
Facebook
Twitter
Pinterest
WhatsApp