Talking to the president in a meeting held at Aiwan-e-Sadr in Islamabad, the Saudi ambassador said that during the Saudi energy minister’s visit Pakistan, other major projects, in which Saudi Arabia has shown interest, will also be finazlized. 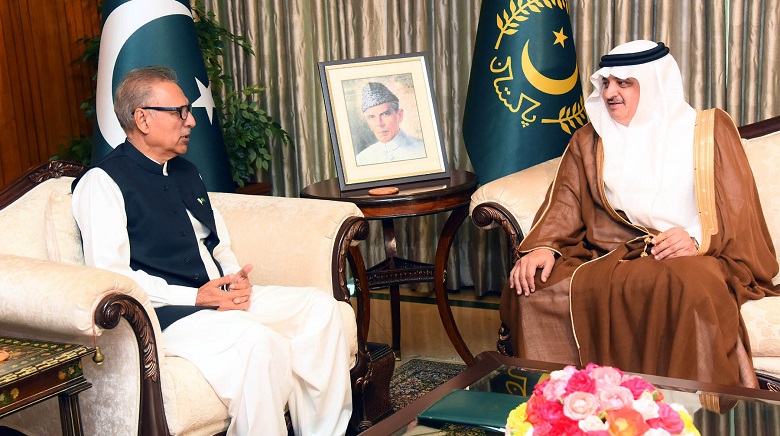 Welcoming the ambassador, the president underlined the close, cordial and brotherly relations that exist between Saudi Arabia and Pakistan and highlighted different areas of economy where Saudi investors can invest.

The president, in particular stressed that there is a need for exchange of more business delegations between the two Countries. He said that the Saudi ambassador could play a critical role in increasing the bilateral trade.

Dr. Arif Alvi lauded the role of Pakistan’s armed forces for defeating terrorisms in the country which has resulted in the establishment of durable peace in the Country and revival of its economy.

The Saudi ambassador briefed the president on two recent visits of Prime Minister Imran Khan to Saudi Arabia, and said that they have been very successful resulting in enhanced and multi-faceted economic cooperation between the two Countries.

Nawaf Bin Said Al-Malkiy appreciated the peace and stability prevalent in Pakistan and steps taken by the government to invite foreign investors to invest in various sectors of economy.

Mati
Mati-Ullah is the Online Editor For DND. He is the real man to handle the team around the Country and get news from them and provide to you instantly.
Share
Facebook
Twitter
Pinterest
WhatsApp
Previous articleQureshi stresses need for enhancing Pakistan-EU bilateral trade
Next articlePakistan-Mongolia Bilateral Political Consultations held Islamabad