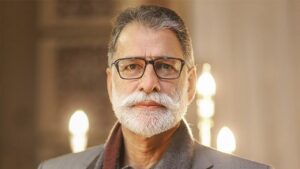 In the election held at the AJK Legislative Assembly in Muzaffarabad on Wednesday to elect the Leader of the House, a total of 48 votes were cast, out of which Abdul Qayyum Niazi received 33 votes while his rival Pakistan People’s Party’s (PPP) Candidate Chaudhary Latif Akbar secured 15 votes.

In a Tweet, the Federal Information and Broadcasting Minister Chaudhry Fawad Hussain said that Qayyum Niazi’s nomination has been made following detailed consultations and keeping in view the proposals.

The information minister said that Niazi is a dynamic and genuine political activist whose heart beats with the party’s workers.

Earlier on Tuesday, the PTI’s Candidate Anwar-ul-Haq was elected as the Speaker and Chaudhry Riaz Ahmed Gujjar as the Deputy Speaker of Azad Jammu and Kashmir Legislative Assembly.

They secured 32 votes each against the Joint Candidates of PPP and Pakistan Muslim League-Nawaz (PML-N) who got 15 votes.